A blue-feathered bird-like humanoid alien who comes from the Planet Klondike in the Andromeda Galaxy and fights with a Plasma Claw.

From within the past history of Klondike, a huge meteorite had made a strong impact on it via its own powerful crash, which had caused the seas of Klondike to develop strong acidity in due time and that this sudden and unexpected turn of events would eventually lead to the extinction of the mammals on the planet while the bird species had survived and evolved into bird-like humanoid aliens. Because of this, the bird-like humanoid alien race of Klondike had soon adapted and established a disciplined and independent society that was based on the main principles of both honor and nobility.

Soon after the Earth Federation Army was defeated by the Klondike Army from within their war against each other, a release order was issued for Zelkin and that he was to be free himself so that he could return to Klondike in due time. However, the release order was never fully processed due to both the mistakes and corruption of some Earth Federation Army officials, who were still angry and bitter about the war between Earth and Klondike. At the same time, Klondike had soon engaged in war with other planets from within the Andromeda Galaxy and because of this, Zelkin was soon forgotten by his own people, who were falsely told that he had died in prison by the Earth Federation Army.

Four years later, while Zelkin is exercising in his Zeta satellite prison cell, Dr. Edward Bilstein initiates his planned escape, soon encountering Zelkin in due time. Upon sensing a great amount of Plasma Power within Zelkin, Bilstein offers him a deal, in that should Zelkin join up with him, he'll be able to exact his vengeance towards Earth and its people. Even though Zelkin senses a dark and malevolent intent from Bilstein in his own fighting spirit, he still feels indebted to him for having to help him finally be free from prison after so long and because of this, Zelkin becomes a member of the Fourth Empire, though in due time, Zelkin starts to personally question on whether or not Earth and its people are truly evil and that whether or not he's justified in exacting his vengeance towards them.

In the following sequel Plasma Sword, Zelkin, who had finally realized that not all of the Earthlings are cruel and brutal while also defecting from the Fourth Empire at the end of the first game from within the process, travels back to Zeta after hearing and learning about both Bilstein's Ghost and the unexpected return of both the original Bilstein and the Fourth Empire. Resolved and determined to atone for his past actions, Zelkin joins up with Hayato Kanzaki (who is said to be a past acquaintance of Zelkin prior to the events of Star Gladiator) and the rest of the Star Gladiators in order to battle against Bilstein and the Fourth Empire and from within Zelkin's true ending, he and Hayato battle against each other in an honorable duel, in which Zelkin emerges as the victor and that he eventually gives a head feather to Hayato as a true sign of mutual respect via a Klondike ancient tradition before soon departing back to Klondike. 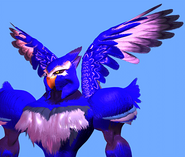 Zelkin in Star Gladiator.
Add a photo to this gallery
Retrieved from "https://capcom.fandom.com/wiki/Zelkin_Fiskekrogen?oldid=135501"
Community content is available under CC-BY-SA unless otherwise noted.