Master Zeku (是空師匠 / ゼクウししょう, Zekū-shishō?) is a video game character from the Street Fighter series, first appearing in Street Fighter Alpha 2 as a non-playable character before making his playable debut as the final character of the second DLC season of Street Fighter V.[4] Zeku was formerly the 38th grandmaster of the school of Bushinryu Ninjutsu, after being succeeded by his pupil Guy, he set out on a journey of self-discovery.

Zeku has long white/gray (brown in his younger form) hair with full fringes covering his eyes. In the Alpha series, his hair is depicted as brown and he wears an outfit identical to Guy's, only green. This outfit appears in Street Fighter V as his third alternate costume. In the UDON comics, Zeku is portrayed with a moustache.

In Street Fighter V, Zeku wears a traditional yellow and green dragon designed vest with a matching yellow trim and green cloud design and a drawing in the back resembling the War God from Forgotten Worlds. Underneath his vest is a dark blue long sleeved ninja garb which is tied in a yellow obi as the left sleeve are ripped into short sleeve, matching dark blue traditional pants and open-toed boots. He has an orange turtleneck beneath his garb. In his younger alternate self, he wears a dark blue ninja suit with half sleeves and wears a red ninja scarf to cover his mouth. He also has a red sash which is tied into a obi as the sash in each side are hanging loose.

In his first alternate costume, Zeku wears a modern type of outfit consisting of a yellow orange long sleeve button shirt with the black cloud design while his sleeves folded into cuffs, and a blue and light blue striped neck tie on the collar, indigo pants and brown shoes. He also gains a dark blue arm wraps on both of his arms which is tucked into the sleeves of his button shirt and has a silver watch on his left wrist. His younger form wears the same outfit with a formal suit jacket within it.

His second alternate costume is a blue ninja suit worn by with a large bowl hat. His younger form wears the same but with a kanji at the left side.

While Zeku can be seen as just a simple serious and stern teacher, he does have a youthful, cheerful, upbeat and a well mannered attitude as well as a strong sense of justice. His past experiences with sparring his former master, Genryuusai, was influenced through his former disciple turned successor, Guy. He has a odd mannerism in which he likes to talk with himself, normally in his young form.

Zeku's appearance in Street Fighter V shares many similarities and thematic elements with another Capcom character; Hiryu from the Strider series.[5]

Because of these connections, it is theorized that the Strider series exists within the same shared universe as the Street Fighter series, implying that Zeku may have been the founder (or part of the founders) of the Striders. Whether or not the connections between the series are intended to convey a shared universe or if they are simply referential in nature is unconfirmed, however.

Zeku was the 38th Successor of the Bushinryu Ninjutsu school. He became the Grandmaster after defeating his former teacher Genryusai, but refused to kill him[citation needed] as the Bushinryu commandments deemed because he saw him as a father. Although Genryusai had focused primarily on Ninjutsu, Zeku had improved the style by incorporating a variety of Taijutsu techniques on it.[1]

Zeku then became the teacher of Guy, and taught the young Japanese-American ninja all he knew. Eventually he and his student would battle to see if Guy was worthy of being the 39th Successor of the Bushinryu school. Guy won, and allowed Zeku to go on his own path after passing on the grandmaster title, like how Zeku before him refused to kill Genryusai. Zeku was proud of his disciple and ordained him the 39th Successor of Bushinryu Ninpo. He then disappeared.

Zeku's character story begins with a brief history on the 600-year art of Bushinryu, but after teaching the art to Guy, Zeku is ready to branch out and craft a new style of martial art. His search for disciples in the new art leads him to the Kanzuki Estate, where he (in his young form) is first greeted by Ibuki; the two fight, with Zeku afterward extending an offer to Ibuki to join his new order, but Ibuki doesn't even consider the offer, disappointed at Zeku's true age.

Zeku eventually finds Karin and extends an offer of his services; after initially turning down the offer, Zeku insists on working for her, naming numerous services that he can perform as a ninja "in these globalized times". Karin asks for a demonstration while she considers his offer, and when she loses the fight, she is left impressed by his skill. Zeku leaves, assuring Karin that she can contact him when he is needed.

Zeku is later seen contemplating his evolved art's possible contributions to modern society. He concludes a name is needed for his new art, but after considering the name "Shin Bushinryu", he decides the name should be English to better suit the modern era. The story ends with him being beside himself on the art's new name, giving consideration to the name "Striders" among others.

Zeku fights using Bushinryu Ninjutsu. As the noteworthy 38th successor of Bushinryu, Zeku is a very proficient and adept ninja master whose career has been considered to have revived Bushinryu back to its former glory since the languishing days of the Meiji Restoration; along with having incorporated integral aspects such as Taijutsu and close quarters combat to recreate the school's very own martial arts, he is extremely well versed and studied in his fighting style's dynamics and techniques to where he is equipped for many situations and encounters.

Zeku's moves are similar to that of fellow Street Fighter ninjas like Vega, Guy and Ibuki. He is also able to transform to his younger self using his V-Skill or a down-down motion.[7]

Zeku's old and young form moveset are near completely different from each other. Zeku fights using his new fighting style in his old form, combining moves from Bushinryu with his new techniques. His new fighting style focuses on a mid to far range game, relying on long range special moves that function as pokes. Although his special moves in his old form serve a fireball type function, they are very different from the standard fireballs, taking the form of a long range instant shock-wave rather than a traveling projectile. However, Zeku's combos tend to knock back his opponent a large distance and he lacks good wakeup pressure options as a result.

Zeku's first V-Trigger is the Bushinryu Shingekiko he gains access to a fast dash that can be followed up with normals that chain into each other and end in a palm strike or kick depending on what form. The last strike is safe on block and can be cancelled into CA. His second V-Trigger is the Karura Tenzan a anti air attack that can be cancelled from specials and has zeku launch the opponent up then preform several strikes on them and land back on the ground in his other form. It can be done twice.

Due to the major difference between the two forms, the character is very daunting to learn, having one of the biggest movesets in the game. A Zeku player will need to keep track of each form's moves and what each form is capable of, whilst still keeping track of which form they are in mid match. As a result of contrasting two forms, Zeku can quickly and drastically switch up his playstyle in a match to throw off his opponent and to catch them off guard. 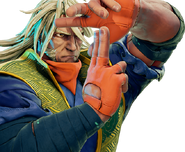 Character select portrait in Street Fighter V.
Add a photo to this gallery

Retrieved from "https://capcom.fandom.com/wiki/Zeku?oldid=137924"
Community content is available under CC-BY-SA unless otherwise noted.