Her younger brother, harmonicas and violins, clothes with lace and frills

Ravens, squids, octopi, other soft-bodied animals, the Reverse Society of the Kirishima and Imawano clans

Yurika Kirishima (霧島 ゆりか Kirishima Yurika) is a fighting game character introduced in Project Justice, the second game in the Rival Schools series. She is the older sister of the game's main antagonist, Kurow Kirishima.

Yurika is a calm and timid young lady who's not the type of person to yell or make a fuss out of anything. On top of that, she does not do things on her own accord. She is musically gifted, being able to master just about any musical instrument; in particular, her mastery of the violin is at par with that of a professional. She is also seen playing Kurow's flute during the School gang war between Gedo High and Seijyun High while trying to control Daigo.

Yurika has long ash-brown hair which is styled into two huge ringlets, which frame her face and cascade over her shoulders. She also sports cinnamon-bun-style curls on the crown of her head. Her eye color is a very dark purple/black, with the colour bleeding into the whiteness of her sclera, which lends her a dull-eyed, unhappy look.

Like Kyosuke, Yurika wears an altered version of the Seijyun High school uniform; she wears a cyan short sleeve jacket with white and black linings at the edge, a white long sleeve sailor fuku with red laced ribbon at the center of her collar, white long frill skirt with black linings and a large red bow at the back, white stockings and red crossed flats. Her fuku is white with black cross linings in each sides and a Seijyun emblem at the left side of the jacket. She also wears white gloves.

Yurika carries a violin and a violin bow which she use as her main weapons when she utilizes her fencing abilities.

After the events of Rival Schools: United by Fate, Akira was transferred to Seijyun High, leaving her without any friends. That is, until she found one in Yurika, to whom she had told her about her concern for her older brother, who had been acting irrational as of late after the latter's return from his personal training journey. Yurika eventually agrees to help Akira out in figuring out the mystery of this problem, with the two of them soon being joined by Zaki from within their quest.

Unknown to both Akira and Zaki however, Yurika is actually a conspirator from within her younger brother's evil plan to cause tension and distrust among the schools from within his personal ambition of having to conquer Japan and the rest of the world by force and that Yurika herself was given a past order by Kurow to distract Akira and the other students alongside with her fellow conspirator Momo. However, Yurika soon has a change of heart due to the friendship that she had formed with Akira and Zaki while also feeling and deciding at the same time that she doesn't want to cause any more trouble for Akira and the rest of the schools as well and because of this, Yurika switches sides and helps aid Akira and her friends (Zaki, Edge, and Gan) out in saving and freeing Daigo from his brainwashing.

After Kurow's defeat and Hyo's death, Yurika had soon left Seijyun High out of personal guilt for taking part in her younger brother's evil plan, but she eventually returns a while later, where she is warmly welcome back by both Akira and Zaki.

Yurika fights with her violin, her violin bow can deflect projectile attacks back to her opponents. The way she uses the violin bow is similar to how a fencer would wield a fencing rapier.

Yurika appeared as a card in the SNK vs. Capcom: Card Fighters games.

She made a cameo appearance in Felicia's Capcom Fighting Evolution ending. 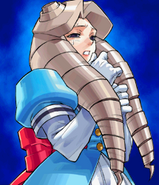 With Akira and Zaki

Cameo in Capcom Fighting Evolution (on the right)
Community content is available under CC-BY-SA unless otherwise noted.
Advertisement