Yoshimoto Imagawa (also known as Muri) is a character from the Sengoku BASARA series.

In the games, Yoshimoto wears a mask and seems childish and cowardly, but will fight when ultimately cornered. Yoshimoto was a brother-in-law to Shingen Takeda due to an alliance via marriage proposal. When facing him on the battlefield, the player will often be met with decoys, until the real Yoshimoto reveals himself. He is eventually murdered by Nobunaga in the storyline of the series. Yoshimoto wields a giant fan and his element is light. 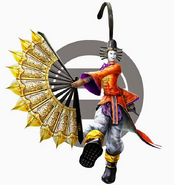 Sengoku BASARA Chronicle Heroes
Add a photo to this gallery
Retrieved from "https://capcom.fandom.com/wiki/Yoshimoto_Imagawa?oldid=137889"
Community content is available under CC-BY-SA unless otherwise noted.