Yoshihiro Shimazu (Zaan in Devil Kings) is a character in the Sengoku BASARA series of stragety action games. His element is lightning and his weapon of choice is a Broad Sword. He also has a powerful shouting ability called Truth that can knock back and damage any enemies that are close to him.

Yoshihiro Shimazu is depicted as an elderly, though muscular man with his white hair pulled straight up in a top knot, wielding a big sword. His default outfit has two thick ropes crisscrossed around his torso like bandoliers, and one around his waist. Yoshihiro likes to drink and fight and even more so when his rival, Tadakatsu Honda, is in the enemy ranks. He joins the Western Army in Sengoku BASARA: Samurai Heroes. In Kotaro's alternate story line, he joins Sōrin's forces and becomes a Xavist. His name is then changed to Chester.

Yoshihiro appeared in the original game as a NPC, but did not make his first playable appearance until Sengoku BASARA 2. He has been featured in every single game in the series since. In Sengoku BASARA 4, he is unlocked by completing Motonari Mori's storyline. 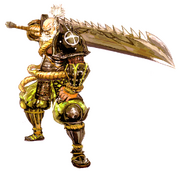 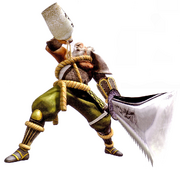 Resting on a hammock 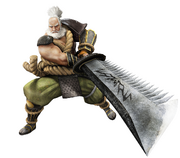 Sengoku BASARA 4 Alternate Costume
Add a photo to this gallery
Retrieved from "https://capcom.fandom.com/wiki/Yoshihiro_Shimazu?oldid=137891"
Community content is available under CC-BY-SA unless otherwise noted.