Yoko is a former Umbrella Corporation employee, and a survivor of the outbreak of the T-Virus in Raccoon City. As the result of her studies, she is extremely knowledgeable about computers. She has a quiet, reserved personality, but the strength of her inquisitive mind emerges with a surprising toughness.

A mysterious young woman, Yoko claimed to be a 20 year old student of Raccoon City's prestigious local university. An expert with computers, she is a somewhat shy and softspoken person, although she is prone to bouts of uncharacteristic bravery when it is needed the most. Once focused on something, she will relentlessly pursue her goal until it is achieved. In her spare time, she collects various kinds of gadgetry and is a voracious reader.

It was later discovered that Yoko was originally employed, presumably as a computer technician, in William Birkin's laboratory underneath Raccoon City. She was also one of the subjects who donated cells to the project that would create the Tyrant. Subsequently, Yoko was operated upon by an Umbrella researcher named Greg Mueller, to suppress her memories of the experiment.

After escaping Raccoon City, Yoko suddenly regains her memory as she watches it being bombed, and goes on to testify against Umbrella in court with Linda Washington. Yoko declares that she is fulfilled now, and even though there are many things to do, that they may be hard, she feels like she's made progress.

During the Outbreak, Yoko wears a black singlet with a long sleeved green over-shirt, denim blue jeans and brown shoes.

In the intro movie to the Outbreak scenario at J's Bar, Yoko is seen heading to the bathroom wearing glasses, an Umbrella uniform and has long hair. She is then attacked by a zombie while cutting her hair (most likely to change her appearance).

She is the only character to have five unlockable Alternate Outfits: "Gym Class", "Spring Fashion" and "J's Bar Disguise" from Outbreak, and "Workers' Republic" and "Summer Daze" from File 2.

To unlock and purchase three of these costumes, special items which are scattered throughout various scenarios at varying difficulty levels in both games must be found. "J's Bar Disguise" is unlocked after completing any scenario on any difficulty as Yoko. To unlock "Summer Daze", players must first clear Elimination 3.

Yoko is often considered a necessity in coordinated teams (especially in Hard Mode) due to her unique ability to hold 8 items of any kind rather than 4. It should be noted that while Cindy can technically hold the most amount of items out of any character, only her default 4 can be used by any item just like every other character with her case only holding extra herbs. Getting the best ending on hard mode is considered almost impossible as without Yoko there are ammo shortages against the final enemy due to the more limited space. Her unique ability is an avoidance one (similar to the other females). In Yoko's case she falls back if the R1 and Circle button are pressed and if Circle is held Yoko proceeds to crawl away from the original area she was facing in a 90 degree turnaround. Outbreak 2 buffed this ability by letting Yoko shove her enemy (albeit rather weakly due to her build) then fall back to crawl away.

In terms of character attributes Yoko's infection rate is the lowest in the game. Meaning (assuming no conflict) Yoko will outlive all her partners, which can be useful in longer missions that the player hasn't learned how to complete. However in most other areas Yoko falls in the lowest ends out of any character. She is slower moving than every other character in the game. Due to her small size and build she deals with the most firearm recoil in the game (as well as having the longest recovery time with melee weapons), and while her infection rate is the slowest to reach 100% she takes less hits than everyone else and it takes far less hits for her to be knocked down by regular attacks and can't stand up by herself compared to the rest of the characters. It is recommended in solo missions for players (when possible) to stay with AI that are more programmed to attack such as Kevin as Yoko isn't well suited to defend herself, which is a bigger problem on higher difficulties, other AI such as Cindy will run away from conflict leaving a Yoko player in danger.

Yoko has the lowest health in the game out of all characters at 1300, 200 below Cindy who is the second slowest. This adds on to the list of disadvantages Yoko has for the major advantage of her backpack. As a mitigation of this very low stat Yoko also has the smallest rise of infection among the cast, meaning Yoko should in general outlive everyone else in an extended play. Yoko can actually afford to fall and crawl in her danger state without being able to stand up a good amount of times and still outlive characters like Jim (assuming she is picked up in a reasonable amount of time).

However, more than any character Yoko (whether a player or AI) has to be watched in cases of monsters that can just kill such as the window zombie or Gamma Hunter. Due to Yoko's very low health value both these monsters pick up Yoko before any other character (which is actually kind of realistic as Yoko is also the smallest and lightest out of all playables) and begin their process. The Window Zombie will pick Yoko up and take her away, if the player is slow to escape it can even try and take her if she was caught at a yellow "caution" state, the Gamma Hunter will pick up Yoko and put her in it's mouth. In this state Yoko can't escape on her own despite her struggling and in both instances she needs to be watched and saved by an ally. While it is not favorable for any ally to die it is especially bad for Yoko as if any of these scenarios happen the survivors are denied the chance to use the backpack ability of her corpse. It should also be noted both these enemies bypass the "crawl" stage too meaning Yoko's biggest advantage becomes her biggest weakness here. 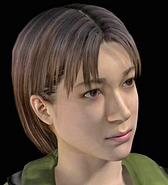 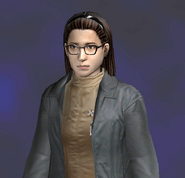