One of Dr. Wily's creations and originally a fortress boss in the first game, Yellow Devil can dismantle himself and cross through the screen to attack enemies. The big yellow blob's weak point is its red eye, which is the controller of the nanobots it is composed of. This eye is able to shoot small projectiles.

In the remake Mega Man Powered Up, it is revealed that it can talk, but the only thing it can say is "Bumo".

In the arcade games Mega Man: The Power Battle and Mega Man 2: The Power Fighters, it appear as the penultimate boss of the courses "Mega Man 1~2" and "Mega Man 3~6" from Power Battle and "Rescue Roll!" from Power Fighters. It has new attacks like shoot beams from its eye, separate into smaller versions of it, walk, jump, throw part of its body that bounces around the room, and absorb players from its arm to launch them.

It has also a short appearance in the opening scene of Mega Man 8.

"Yellow Devil is the large robot who stands guard within the fortress's main control room. His body parts are composed of an organic ferromagnetic polymer gel, and each part is controlled by a nucleus-like core. Changes in the magnetic field allow it to take on the distinctive Yellow Devil form. What appears to be its eye is the main core that controls its entire body. Wily believed Yellow Devil to be his greatest creation ever, but due to the fact that Yellow Devil's core could be disrupted by a strong electromagnetic pulse, the Thunder Beam proved to be his ultimate weakness."

Yellow Devil is one of the three enemy racers (the others being a Roader and Sniper Joe) in Mega Man Battle & Chase, and there is a secret boss recoloring of him called Black Yellow Devil (ブラックイエローデビル, Black Yellow Devil?), sometimes shortened to Black Devil, which caused confusion between this creature and Shadow Devil.

Rainbow Devil is a boss from Mega Man Zero, fought in the Neo Arcadian Tower. It is a bunch of slime that, like its name, changes colors. It is controlled by a Pantheon head. This boss reappears in the final stages of Mega Man Zero 2.

Yellow Devil appears in the Dr. Wily Castle stage in Super Smash Bros. for 3DS and Wii U. 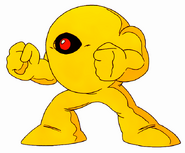 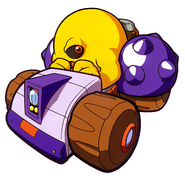 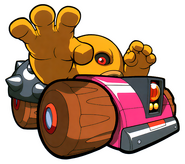 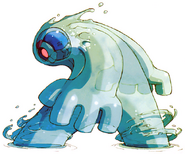 Rainbow Devil
Add a photo to this gallery
Retrieved from "https://capcom.fandom.com/wiki/Yellow_Devil?oldid=120408"
Community content is available under CC-BY-SA unless otherwise noted.