Yawn are enemies from the Resident Evil series. It is a snake-based B.O.W. that first appeared in the original Resident Evil and its remake.

It was originally a specimen that escaped from the laboratory, and grew to huge proportions as a result of exposure to the T-Virus. It got its name from the lab's researchers, due to the fact that it appears to be yawning wide before swallowing its prey. Its fangs inject a potent venom that can only be treated with a serum found in the mansion's medical storage room. If the wound is not treated in time, the victim will be immobilized and eventually killed by the poison.

In Resident Evil: Deadly Silence, Yawn reappears in the same room where players earlier battled Plant 42. Unlike earlier, Yawn now has thicker scales, making it invulnerable to damage except for its soft underbelly and mouth.

Yawn reappeared as a boss in Resident Evil: The Umbrella Chronicles and Biohazard Pachislot. 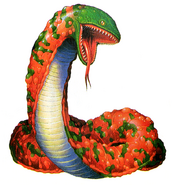