Yami is a character from the Ōkami series of action adventure games. It is the main antagonist and final boss of Ōkami and the considered archenemy of Amaterasu.

At first glance, Yami appears to be a mechanical sphere covered in arcane, Moon Tribe-like markings. As shown when Amaterasu fights the Lord of Darkness in the Ark of Yamato, the sphere is capable of altering itself into different forms, including disc-shaped platforms, a slot machine, a humanoid figure with whip-like arms and a giant clawed hand. Each transformation appears to change the shape and colors of the markings on Yami's body. Yami's true form is that of a small black fish contained in a glass ball full of water. Its body bears markings similar to Amaterasu's, but colored blue instead of red. This form is usually hidden within the larger mechanical sphere, and serves as Yami's primary weak point during the battle.

Like Amaterasu, Yami is not able to speak. However, it appears to be capable of expressing rage.

Yami's origins are unclear, as very little is said about it until the very end of the game, and its very existence is only revealed after Amaterasu confronts Ninetails at the peak of Oni Island.

It is believed that Yami and its demonic legion were being contained within the Ark of Yamato, though Waka was unaware of this when he brought the Ark to the Celestial Plain, fleeing an unknown catastrophe that wiped out the Moon Tribe, which also seems to be caused by Yami. When True Orochi later attacked the Celestial Plain, Waka evacuated the Celestials into the Ark and departed for safety. After they fled, Yami's endless legion of demons attacked, caused the event of the Ark of Yamato genocide and the ark crashed into the mortal world.

Two hundred years later, after Amaterasu and Oki vanquished Lechku and Nechku atop Wawku Shrine, the dark spirits of the twin demonic owls merged with the essence of the previously defeated demons (Spider Queen, Crimson Helm, Orochi, Blight and Ninetails) and moved toward the Ark of Yamato. Later, Oki returned Kutone to its pedestal beside Laochi Lake. The moment the sword returned to its place, a golden light shot forth from it, melting the perpetual ice of Laochi Lake. Then the ark emerged and opened a rainbow path down to the pedestal. Amaterasu could board the ark, but Issun couldn't. Within the Ark, after engaging in rematches against Spider Queen, Crimson Helm, Orochi, Blight and Ninetails, Amaterasu moves on to battle Yami. It is revealed that Waka has been trying to battle Yami, but to no avail, as his attacks left barely a scratch. As the eclipse of the Day of Darkness completes itself, Yami awakened, and drained Amaterasu of all her Celestial Brush techniques, then blasted Waka off the arena, seemingly to his death. Nonetheless, Amaterasu engaged in a long battle, regaining her powers as the fight progresses.

Finally, Amaterasu seemingly defeated Yami, but then an illusion of Issun appeared, distracting the Sun Goddess from the recovered Yami. It grabbed Amaterasu and once again drained her of her Celestial Brush techniques but this time, Yami destroyed the techniques' respective constellations. All hopes seemed lost, but then Issun, who had realized his destiny as a Celestial Envoy, spread the words of Amaterasu's deeds to the people of Nippon, thus restoring their faith in her. With her powers restored by people's faith, Amaterasu regained her full strength, and annihilated Yami for seemingly an eternity. Then, Waka emerged from the depths of the Ark of Yamato, alive. He and Amaterasu returned to the Celestial Plain, restoring peace and harmony to the world.

Nine months after the events of Ōkami, darkness had suddenly returned to curse Nippon with its dark grip, and Amaterasu's son, Chibiterasu, came to dispel the darkness. Later, during the climax of his journey in the finale, it is revealed that upon Yami's destruction, it had splitted into five dark entities (Master Anura, Bullhead, Renjishi, King Fury and Akuro), with Akuro being the strongest entity. It was then its turn to recollect the other four essences and complete itself with a vessel of light. Also, Akuro's plan all along is revealed, as whenever Chibiterasu kills an entity, Akuro would come and absorb the remnants.

Yami appeared as the primary antagonist and final boss in Tatsunoko vs. Capcom: Cross Generation of Heroes/Ultimate All-Stars as the one responsible to merge the universes of Capcom and Tatsunoko into the real world. As the final boss, he uses his first, fourth and final forms. 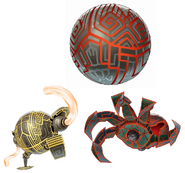 Yami as it appears in Tatsunoko vs. Capcom.
Add a photo to this gallery
Retrieved from "https://capcom.fandom.com/wiki/Yami?oldid=137977"
Community content is available under CC-BY-SA unless otherwise noted.