Yai Ayano is a character from the Mega Man Battle Network games. She is the NetOp (Operator) of Glyde.EXE. Yai is the brilliant daughter of a rich CEO. She is smaller and younger than most of the other characters, yet she is more intelligent. Yai lives in a luxurious mansion in ACDC Town, where she occasionally plays the harp.

Yai makes a very flamboyant introduction into Lan's school in the anime MegaMan NT Warrior. She starts off with a slide show and at lunch, she refuses school food and eats a steak. Lan and Dex sneak around her house, but get caught in numerous traps activated by Yai and Glyde. Later, she gets caught in traffic when Maddy and WackoMan attack the inside of a street light causing a traffic jam. Yai, however, desperately needs to go to the bathroom and sends Glyde to investigate. Once traffic is clear, she gets to go to the bathroom (after being in excruciating pain).

In one episode of NT warrior, she follows Chaud Blaze during an intermission break in the N1 Grand Prix. She spies on him when he makes a business deal and gets caught. They both get stuck in the elevater and Chaud helps Yai climb out. Since then, Yai secretly adores him.

After the N1, Yai brings Mayl, Dex and Tory to the island that Lan is on vacation in. She exhibits a private jet, a submarine and a veritable army of maids.

In MegaMan NT Warrior Axess, she spends a lot of time in Kingland. However, she once makes Lan and co. come to Kingland by sending on various errands by email to a specific location. Once there, a giant robot kidnaps them and transports them to Kingland. They have to find character data for one of her company's games and are taken to places that Yai likes. It turns out that the data is a replica of Yai's personality. They figure out that the data will be at another place that Yai likes, and trap the virus carrying the data and retrieve it. 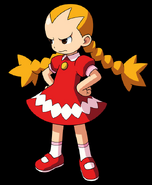