Xavi, sometimes referred to as Zabii and Q-Ball in Devil Kings, is a character from the Sengoku BASARA series. His element is fire and his weapons of choice are twin bazookas.

Xavi is a missionary whose intention is to spread the love of God in Japan. Very proficient with machinery; his stronghold contains traps and mechanical drones (bearing resemblance to himself). In Devil Kings, he speaks with what seems to be an Italian accent. He is in a religious rivalry with Itsuki and Kennyo Honganji.

In Sengoku BASARA: Samurai Heroes, Xavi's teachings inspire the creation of a new religious movement in the island of Kyushu, called "Xavism", led by a devout named Sōrin Ōtomo. Although he does not appear physically in Samurai Heroes, having moved on to another region of the world to spread his religion, portraits of him appear in the Hetsugigawa stages. 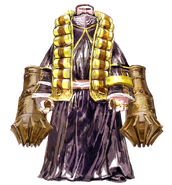 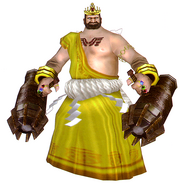 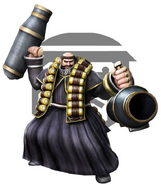 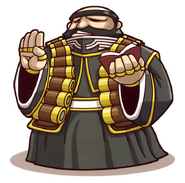 5TH ANNIVERSARY HEROES Artbook
Add a photo to this gallery
Retrieved from "https://capcom.fandom.com/wiki/Xavi?oldid=137887"
Community content is available under CC-BY-SA unless otherwise noted.