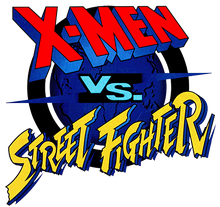 X-Men vs. Street Fighter is an arcade crossover fighting game released by Capcom in 1996 and is the first game in the Marvel vs. Capcom series and Capcom's Versus series.

X-Men vs. Street Fighter was the first game to blend a tag team style of combat with the well-known Street Fighter gameplay and many of the fighting mechanics used in the game and its seuqels were first developed and refined in two other fighting games Capcom had developed earlier, serving as precursors to the Marvel vs. Capcom series: X-Men: Children of the Atom, which featured characters strictly from the X-Men universe, and Marvel Super Heroes, which gleaned characters from Marvel's entire roster (X-Men included).

The game was later ported to the Sega Saturn in 1997 and the original PlayStation in 1998. However, the tag team system was omitted (as a main feature) from the latter version due to memory limitations, and could only be used in mirror matches.

X-Men vs. Street Fighter uses a system similar to the style developed in Marvel Super Heroes, and adds the tag team gameplay feature. Instead of the usual best-two-out-of-three round format, the game's matches consist of two-on-two battles between tag teams. The player controls one character at a time, while the other awaits off-screen. The starting character can tag the waiting one in at any time by hitting the Hard Punch and Hard Kick buttons, which activates the "Variable Attack"; the tag partner will jump in with an attack and taunt briefly. During their taunt, they are vulnerable to counterattack. The dormant character will able to recover a portion of their vitality, while the current character is fighting. If one character loses all of their vitality, then the tag partner will automatically come to play. A match is over when both members of a team are defeated.

There are other ways to bring the character's partner in; the "Variable Counter", which replaces the Infinity Counter of Marvel Super Heroes, breaks the player's guard to bring the teammate in with a counterattack at the cost of a level of super meter. Also, the "Variable Combination" is a two-character Hyper Combo (the super moves featured in the game) which costs two levels, and will switch the player's current character as long as neither character gets hit during their Hyper Combos.

In terms of sprites and gameplay, the X-Men characters come largely unchanged from X-Men: Children of the Atom and Marvel Super Heroes, with the exception of Rogue, Gambit, and Sabretooth, who are new to the series. The Street Fighter characters uses their Street Fighter Alpha 2 forms and their moves were given upgrades to match the larger-than-life atmosphere of the Marvel games; for example, Ryu's Hadoken is much larger than it is in other games.

While known throughout fan circles as one of the great classic arcade fighters, X-Men vs. Street Fighter had an uneven conversion to home consoles. The reason was that due to the RAM limitations of the Playstation, the port was significantly inferior to the arcade in both graphics and gameplay. Some animation frames had to be removed and slow performance during special moves made the game less similar to the arcade version. Because of memory limitations, this version also lacked the arcade's tag-team setup, unless a code is used for both players fight using the same pair of characters.

Because of those problems, the Sega Saturn version was deemed much more acceptable by fans. Interestingly enough, while the Saturn version may be considered superior, the Playstation version has also become something of a collector's item, fetching high prices on auction sites. 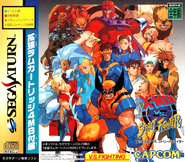 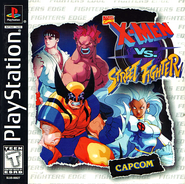 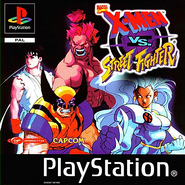 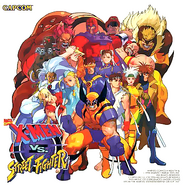 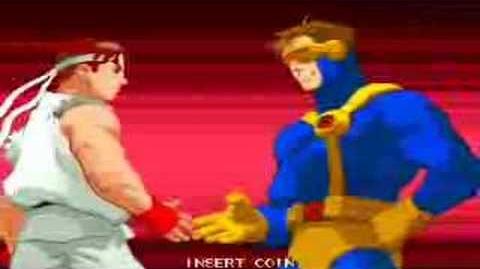