X-Men: Children of the Atom

X-Men: Children of the Atom (エックス・メン チルドレン オブ ジ アトム, Ekkusu Men Chirudoren obu ji Atomu?) is an arcade game that was produced by Capcom and released on the CP System II arcade hardware in 1994 in Japan and in 1995 in North America and Europe.

Based on the X-Men comic book series, it is the first fighting game produced by Capcom using characters under license from Marvel Comics. Released around the time of the mid-1990s X-Men animated series, the game features voice actors from the series reprising their roles. The game's plot is based on the Fatal Attractions story from the comics - players control one of the X-Men or their enemies in their fight against the villain Magneto. They face each of the other characters in the game in best of three one-on-one fighting matches, before battling Juggernaut and then Magneto himself.

The gameplay has much in common with Capcom's previous fighting games, Super Street Fighter II Turbo and Darkstalkers. Children of the Atom adds a combo system that features long combos that can even be performed in mid-air. Also featured in the game are various tactical maneuvers, including the ability for characters to roll. Children of the Atom also introduced multi-tiered fighting environments in which the ground would crumble and characters would fall into lower parts of the level. These concepts and the fast pace of the game would provide the basis for Capcom's Marvel vs. Capcom series, which started with the game's successor X-Men vs. Street Fighter.

Ports of the game were released for the Sega Saturn, PlayStation and personal computers. Of these, the PlayStation version was not as well received as the other versions, suffering from slowdown and missing frames of animation.

X-Men follows the same fighting game controls and conventions Capcom previously established with the Street Fighter II games and the original Darkstalkers. The player can choose between one of six X-Men members or four of their enemies (for a total of ten selectable characters) and proceed to compete in a series of best-two-out-of-three one-on-one matches.

The player has an "X-Power" gauge (similar to the Super Combo gauge in Super Street Fighter II Turbo and the "Special" gauge in Darkstalkers) that builds as the player performs regular or special moves. X-Power gauge starts at Lv. 1 and reaches Lv. 2 when it becomes half-full and an Aura will begin to surround the player's character until it becomes full and reaches MAX level. Players can then perform an "X-Ability", which consumes a small portion of the X-Power gauge, or a "Hyper X", which consumes a greater portion of the same gauge. Breaking one's fall from a throw or performing a counter-throw will also consume a portion of the X-Power gauge when performed.

Other features introduced in Children of the Atom include Super Jumps, the ability to roll away or towards an opponent after falling, the ability to determine the aim of a projectile move (such as Cyclops' optic blasts), and the ability to pursue an opponent after performing a throwing attack for additional attacks. After selecting a character, the player can choose between "manual" or "automatic" blocking. By selecting to automatically block attacks, some features will not be available during gameplay.

The game is loosely based on the "Fatal Attractions" storyline. The main antagonist is Magneto, who plans to unleash an electromagnetic pulse on the Earth that will disrupt the magnetic fields and create havoc on the world's electrical systems ushering in a Dark Age for Earth's non-mutant population. With the promise of a mutant-run planet, the X-Men's most formidable foes join forces with Magneto.

Capcom's contract with Marvel stipulated that Capcom include a character from the Street Fighter franchise in the game, so the developers included Akuma as a secret character.[1]

The home version of the game was originally a Sega Saturn exclusive. The Saturn version premiered at Capcom's August 1995 Summer Festival; this was a 50% complete version with only Cyclops, Wolverine, Psylocke, and Iceman playable.[2] According to Tatsuya Minami, Capcom's senior manager of the Product Planning and Design Section, the biggest difficulty with converting the game to the Saturn was the memory restrictions. All three of the leading game consoles of the time (Saturn, PlayStation, and 3DO) had only 2 megabytes of RAM, while the arcade version of X-Men: Children of the Atom used 32 megabytes for character data alone.[1] Because of this, a third of the animation frames had to be cut for the Saturn version.[3]

The Sega Saturn port (T-1203G) was released by Capcom in Japan on November 22, 1995, which was released in North America and Europe by Acclaim a few months later. Developed by Rutubo Games. A Gamest Mook series guide book was published by Shinseisha on January 13, 1996.[4]

The home version of the game was originally a Saturn exclusive,[5] but versions for the PlayStation and MS-DOS were released in North America and Europe in 1997. Both ports were developed by Probe Entertainment and published by Acclaim.

X-Men: Children of the Atom was very well received in the arcades and on the Sega Saturn.

[citation needed] However, the PC version's reception was mixed and the reviews of the PlayStation version were especially poor.

Covering the arcade version, a reviewer for Next Generation highly praised the selection of characters, the interface, the new special move mechanics, the animations, and the voice overs. He nonetheless concluded that, "Extras aside though, this is still just a meat and potatoes fighting game, no better or worse than several others currently in the arcades."[7]

Scary Larry of GamePro said the game was "converted perfectly" to the Saturn and applauded the accessible controls, fast gameplay, colorful graphics, and lack of slowdown.[8] Sega Saturn Magazine gave the Saturn version a 94%, declaring it "arcade perfect" aside from a few barely noticeable missing animation frames, and calling the game itself "the first time comic book superheroes have been successfully translated to game format." They especially praised the well-balanced and distinctive characters and the combo system.[9] A reviewer for Next Generation bemoaned the 2D fighting game genre as done to death, but admitted that X-Men: Children of the Atom manages to be highly appealing in spite of this. He complimented the smooth animation, brightly colored graphics, and balance of character strengths and weaknesses, and acknowledged that "Character recognition of the X-Men adds to the experience".[10] Maximum focused praise on the accuracy of the conversion, saying that it was graphically almost identical to the arcade version and loyally recreated the gameplay. They also praised the home-only features, especially the survival mode,[11] and gave it their "Maximum Game of the Month" award.[12]

GameSpot's review of the PC version opened by calling it "an admirable and near-exact conversion of Capcom's 1995 arcade hit" which "proves that the PC is indeed a viable platform for fighting games", but went on to criticize that it does not run as fast or at as high a resolution as the arcade version, and lacks the ability to chain combos.[13]

According to a retrospective review by GameFan, the game "displayed some of the most chaotic and over-the-top action found in a fighter at the time (...) achieving much success and praise across arcade rooms." The Saturn home version achieved "an experience that was nearly 1:1 in comparison to the CPS-2 behemoth." The PlayStation port "suffered from missing frames, slowdown and lengthy load times" due to the platform's limited RAM and its architecture restrictions in regards to 2D games, but was called "an admirable attempt" nevertheless.[14] In 2011, GamePro retrospectively listed "terrific voice-acting (using some of the same voices from the series), and a real dedication to the characters from the lore" among its strong features, noting that "many of the sprites and movesets would be utilized in the many, many Capcom fighting games that would feature the X-Men," and adding that "some character imbalances and a small character roster are about the only thing you can knock it for, even today."[15]

In 2012, GamesRadar included it among the little-known classic fighting games that deserve HD remakes, adding that "Capcom set the precedent with this lavish-looking fighter, cramming in the fan service, captivating graphics, and frantic gameplay that the Versus series is now known for, but in the one-on-one variety."[16] In 2013, Nerdist included it among the top ten most iconic Marvel video games, calling it "a strike of gold, given how it's paved the way for the fighting games following it. [Children of the Atom] introduced features such as the dynamic combo system, air combos, and destructible multi-leveled fighting environments. (...) It also helped that this game had the best soundtrack out of any Marvel-licensed game ever conceived."[17] Children of the Atom placed 17th on the 2013 list of best Marvel video games by Geek Magazine.[18]

Special Thanks to Acclaim Black Team

Special Thanks (continued): And All Capcom Staff
Presented by: Capcom 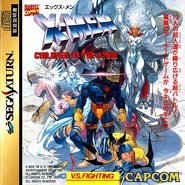 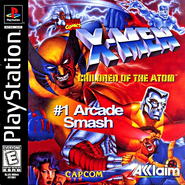 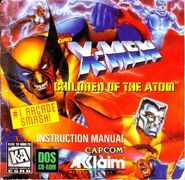