Wood Man (Uddoman in Japanese) is a character from the classic Mega Man series.

A tree-based Robot Master from many classic Mega Man games, created by Dr. Wily. In Mega Man 2, it should be noted that using a fully-charged Atomic Fire (when not using the Leaf Shield) can instantly destroy him (two in Hard mode and the Wily Wars remake).

Wood Man does the same pattern like in his first appearance and is weak to Atomic Fire and Metal Blade.

In Shadow Man's stage, Doc Robot will use the same pattern of Wood Man like in Mega Man 2 and is weak to Needle Cannon and Search Snake.

Wood Man has the same pattern, except he rolls into a log to stun the player. Atomic Fire doesn't kill him in one hit, unlike in Mega Man 2.

Wood Man is the second boss of Episode Two in Super Adventure Rockman. He throws Leaf Shields at the player and can be destroyed. When not attacked, he'll punch the player and is weak to Atomic Fire.

Wood Man's pattern is the same, except Rush (when using him) can drop bombs to remove his shield. The Flame Sword can penetrate through his Leaf Shield.

Wood Man made his final appearance as a data of the Weapons Archive. The orb does the same pattern and he's weak to Triple Blade. 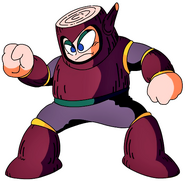 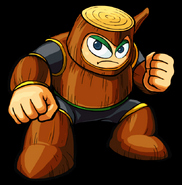 Street Fighter × All Capcom
Add a photo to this gallery
Retrieved from "https://capcom.fandom.com/wiki/Wood_Man?oldid=126523"
Community content is available under CC-BY-SA unless otherwise noted.