Capcom Database
Register
Don't have an account?
Sign In
Advertisement
in: Article stubs, Articles with incomplete sections, Games,
and 7 more

Wolf of the Battlefield: Commando 3

Wolf of the Battlefield: Commando 3, a downloadable game developed by Backbone Entertainment for the Xbox 360's Xbox Live Arcade service and Sony's PlayStation Network, is the third game in the Commando series.

It was released in June 2008, and is the second sequel to Capcom's Commando arcade game, following Mercs, the name Wolf of the Battlefield being a literal translation of the original game's Japanese title (Senjō no Ōkami).

General Ratiev, evil leader of the Zalestad nation, must be stopped. At the player's disposal is a huge arsenal of weaponry, controllable vehicles, and a rag-tag group of specialized soldiers, each with their own unique characteristics. 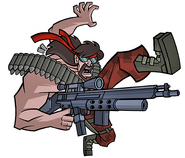 Commando • Mercs • Wolf of the Battlefield: Commando 3
Community content is available under CC-BY-SA unless otherwise noted.