William Birkin is a character from the Resident Evil series of survival horror games.

In the original Resident Evil 2, William is depicted with short brown hair with fringes in each sides and dark blue eyes. In Resident Evil 0 through the Darkside Chronicles, his eyes were depicted as brown.

His main outfit before injecting himself with the G-Virus consisted of a white long lab coat, a pale green long sleeve button shirt underneath with a red long tie in the center, blue corduroy pants and black shoes.

In Resident Evil 0 through Darkside Chronicles, his hair is lighter, his button shirt is white, his pants are darker and his shoes are pale brown.

In Resident Evil 2 (2019 remake), William's fringes are on the right side and his short brown hair is slightly ragged. His pants is changed to grey and his shoes are dark brown.

Birkin is a top virologist working for the Umbrella Corporation and is responsible for the discovery of the T-Virus. He is the husband of Annette Birkin and the father of Sherry Birkin. His involvement in the G-Virus project serves as a catalyst for the events of Resident Evil 2. He also has a supporting role in the prequel, Resident Evil Zero, where he is involved in the events of the game from behind the scenes. His voice was provided by Diego Matamoros in RE 2, an unattributed voice actor in RE Zero and TJ Rotolo in Umbrella Chronicles through the 2019 remake version of RE 2 where both being mocap and reprising his role.

Birkin joined the Umbrella Corporation in 1977 at the age of 15. He was placed at the Umbrella Management Training Facility under James Marcus. There, he became a close acquaintance and rival of fellow researcher Albert Wesker, as they were both considered to be Marcus's top apprentices. They were involved in the development of the T-Virus project, until the facility was closed down in 1978.

Afterwards, he and Wesker were transferred to the Arklay Research Facility on July 31, 1978, where they continued their T-Virus research and were made chief researchers of the facility. Birkin was proud of being the youngest researcher ever to work for Umbrella, until the arrival of Alexia Ashford, who was assigned to be chief researcher of Umbrella's Antarctic facility at the age of 10 in 1981. Although she worked in a different facility, Birkin became jealous of her, especially due to all the praise she was receiving from his co-workers. He became completely focused on his work, until the announcement of Alexia's death in 1983. Despite his rivalry with Alexia, his research yielded no results until he created the Hunter Bio-Organic Weapon (B.O.W.) in the mid-1980s.

He was promoted in 1988 to lead the T-Virus project and completed the development of the Tyrant after he and Wesker assassinated their former mentor, Marcus. By this time, Birkin was married to his assistant, Annette, and the marriage had already produced a daughter named Sherry. When he and Wesker were conducting an experiment with the NE, the prototype of the Nemesis project, they used a female specimen, Lisa Trevor, as a guinea pig. Lisa was the only test subject to fully accept the parasite. Birkin examined her body structure, and discovered that the variation of the Progenitor Virus that was injected into her in 1967 had absorbed all the mutagenic organisms that she had been implanted with since then and mutated into a new virus, which Birkin named the G-Virus.

He received approval from Umbrella's president, Ozwell E. Spencer, to initiate the G-Virus project. In 1993, Birkin and his wife were transferred to an underground research facility established specifically for the project. Birkin also bribed the chief of the Raccoon Police Department, Brian Irons, to cover up the project.

He completed development of the G-Virus in September 1998 and planned on using his final research in order to be promoted to Umbrella's executive board. Nevertheless, he began to disagree with his superiors and planned on selling his research to the US government. He requested to have the military intervene and retrieve him; however, the team that was sent never came and the Umbrella Special Forces Unit Alpha Team, led by HUNK, under orders from Christine Henri and Spencer, came to steal his work. He was shot by the soldiers and left for dead. He injected himself with a sample of the G-Virus and turned into the mutated creature known as G. 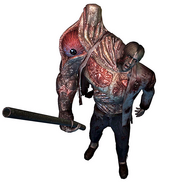 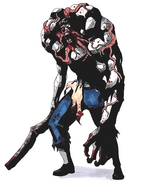 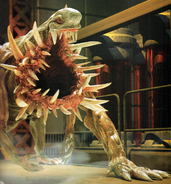