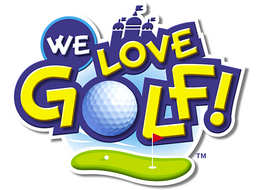 We Love Golf! is a golf game developed by Camelot and published by Capcom for the Nintendo Wii. The game was released in Japan in December 2007, and worldwide the following year.

We Love Golf! is played by swinging the Wii Remote like a golf club. There are numerous courses in the game, including a beach resort and a desert ruin, as well as courses based around pirate and candy themes.[1]

The game allows players to use Mii avatars as playable characters.[2] In addition, a number of Capcom costumes can be unlocked by completing tournaments.[1]

The European, North American and Australian releases of the game also feature online play via the Nintendo Wi-Fi Connection.[3]

We Love Golf! received "generally favorable" reviews, according to review aggregator Metacritic. In Japan, Famitsu gave it a score of one nine, one eight, one seven, and one eight, for a total of 32 out of 40.