Way of the Samurai 2 is an 2004 action-adventure game developed by Acquire, published by Spike in Japan, and published by Capcom in North America and Europe. It was re-released on PlayStation Portable in 2009 in Japan only.

The game is the second mainline title in Acquire's Way of the Samurai series. Story-wise, it is a prequel, taking place many years before the events of the original game.

The player starts as a hungry ronin (who can be either male or female depending on the player's choice) who collapsed at the gate of a famous trading island-city called Amahara. Soon thereafter, a little girl shares her riceball with the ronin, giving him/her energy. A choice appears, introducing the player to the diverse life of a samurai.

Keeping true to the name, the combat systems from the original Way of the Samurai are carried over, albeit with some changes. Amongst them are the inclusion of "stance-breaker" attacks on nearly every weapon (which were previously available only to a select few of swords), simplified guard/parry system, and "instant kill" techniques. Also, many new combos have been added.

Many swords have been added from the previous game. Some special swords from the previous game are even available throughout it. Way of The Samurai 2 added two more stances, "Fencing" stance in which the swordsman keep the sword sheathed until it is required to attack, and "Two Hands" stance, in which the player is able to hold two swords at once. Also, there are new weapons installed such as handclaws, and even odachi and bokken.

The character Dojima from the previous game also makes an appearance, though not relating to the main plotline. Here, he still serves as a blacksmith to enhance the player's swords. The stats, however, are simplified:

Also, the "Appraise" feature is able to make the swords upgraded more powerful. Their effects include addition to attack, defense, durability, tension resistance, or a combination of the above. These, however, require certain conditions to be met, such as number of kills, attack power, etc. Some special swords are able to be appraised based on their name.

Like its predecessor, there are multiple sides in the seemingly peaceful Amahara.

The first is the Magistrates who "control Amahara with an iron fist". Headed by Chief Kuroha, followed by Goshiro Muto and Sosuke Nakumura, the alert and vigilant magistrates arrest anyone they think breaks the law, even the villagers themselves. They do not hesitate to use forged evidence or inventing ludicrous reasons, either. This oppressive rule made them feared by the townspeople.

The second is the Aoto Gang. Under the leadership of the "Old Boss" in the past, Aoto Gang is a group that upheld chivalry, protecting the people from the exploits of the magistrates. All changed when he died. The elections for the new leader hadn't been made yet, but a powerful warrior named Hanzaemon stepped in and filled the void, much to the dismay of the previous boss's daughter Kasumi. Now, they are a ravaging group of thugs, doing all sorts of crimes from extortion to assassination of the Magistrates and anyone (on Amahara Festival day, 26th, Kyojiro and Mifune will go there and kill Muto and Kuroha).

Amahara is an island trading post who is allowed to govern its own affairs. However, the Shogunate have been taking a high interest in the area. Rumor has it that their spies have safely made their way in, blending with the crowd, and are watching every single movement within Amahara. 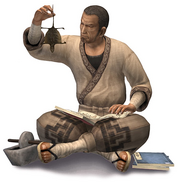 Hanzaemon
Add a photo to this gallery

Retrieved from "https://capcom.fandom.com/wiki/Way_of_the_Samurai_2?oldid=140397"
Community content is available under CC-BY-SA unless otherwise noted.