Wang-Tang (ワンタン) is a playable character from the Power Stone 3D fighting games.

Wang-Tang has long black hair which is tied in a braid, a short sleeve white Chinese training button shirt with green line designs coming from the buttons on his shirt and sleeves. He wears a yellow obi which is tied in the right side of his waist, yellow ochre Chinese pants and shoes with white socks. He also wears a pair of blue bracelets under both of his wrists with shins.

In his anime appearance, he remains largely the same as in the games but with minor changes; his Chinese pants and shoes are light brown, his socks are replaced with white footwraps, and his bracelets are white.

In his Power Change form, his hair is golden blonde, he is shirtless while wearing a half brown armor with brown pauldron on the left shoulder and a green long greaves with white lines and an orange belt, yellow pants and green, white and orange boots. He wears a pair of brown gauntlets instead of bracelets. The outfit he wears has a dragon motif in his greaves and his boots.

A master martial artist from the town of Tong-Ang, Wang-Tang is following his teacher's advice and seeking Power Stones around the world. Always optimistic, Wang-Tang is second to none in Kung-fu skill.

In his ending, Wang-Tang appears to have found the treasure he has been searching for. He returns to his Master and gives him the artifact: golden dentures. His Master scolds him, telling him to go back to his quest and reveals to the player that Wang-Tang's ultimate reward is achieving his "true strength" through the trials of his journey.

While training in the mountains in the town of Tong-Ang, Wang-Tang is surprised by a huge shadow moving across the sky. It is a gigantic floating castle.

"Maybe this is the final trial that my teacher was talking about?" When Wang-Tang enters the castle, he feels the sharp tension he expected.

Wang-Tang's attacks look similar to Kung-Fu. His merit is outstanding agility, and his successive moves which don't allow opponents to catch their breath. He is also excellent at special actions such as wall-climbing. His main weaknesses are fairly low physical strength and low defense. His Power Change meter is consumed very quickly, but he may be a high tier character. In Power Stone Collection, he unlocks the Twin Potion.

In the anime, Wang-Tang is a cook in Wood Land. He trains at Manpuku temple, he does not travel with Edward Falcon and appears very inconsistently up until the finale episode of the series where his Wind Stone was stolen by one of Valgas' wrestling team.

In the anime's storyline, Falcon receives a package from his father that appears to be a normal rock along with a note telling him to travel to Wood Land. When he eventuallys pays a visit, he finds a tent where Wang-Tang is serving food. He decides to dine in and later on befriends him. Eventually, Wang-Tang realizes that Falcon is an expert in boxing and decides to challenge him to a fight in order to test his martial arts skills against him. During their fight, the rock which Falcon received as a package reacts towards Wang-Tang and reveals itself to be the Wind Stone. It then Power Changes with Wang-Tang into Agile Dragon and eventually defeats Falcon while he was in Power Change as Red Whirlwind. Wang-Tang along with Falcon and Ryoma are training outside Manpuku Temple as he was the one who successfully gets the egg on the cliff. He briefly travels with Falcon and his group as he also confronted Kraken as theGhost Pirate before Falcon aids him as Red Whirlwind after the latter lost his power from his stone to Power Change. 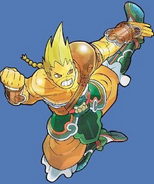 Power Stone 2
Add a photo to this gallery
Retrieved from "https://capcom.fandom.com/wiki/Wang-Tang?oldid=126906"
Community content is available under CC-BY-SA unless otherwise noted.