Capcom Database
Register
Don't have an account?
Sign In
Advertisement
in: Games, Shoot 'em up Games, Shooter Games,
and 7 more

Vulgus (バルガス, Barugasu?) is a vertically scrolling shooter released by Capcom in May 1984. It has the distinction of being Capcom's first video or arcade game, and is included on the third volume of Capcom Generations and later on Capcom Classics Collection.

Vulgus is a very simple concept where the player takes control of a space ship cruising over an alien landscape. The weapon is a simple blaster shot with infinite ammunition. There is also a limited supply of missiles that can be replenished with the POW icons on screen.

The game also allows players to increase the playfield by moving the craft to the left or right while the game scrolls up.

Vulgus, like many other games during this era of gaming, credited its staff in its default Score Ranking Table, which is as follows: 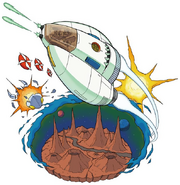