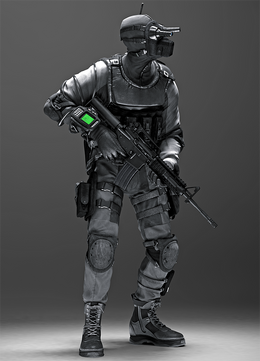 Previously with the former Soviet Union’s security services, "SPECTRE" was well suited to his role as an intelligence technician where his lack of any standout physical or social characteristics helped him to remain virtually invisible in any situation.

He found a home with Umbrella, and his surveillance skills have regularly ensured that the corporation stays well informed and that the Wolfpack keeps the upper hand in combat situations.

Vladimir, along with the rest of the Wolfpack, was sent in to eradicate any damning evidence that would link Umbrella to the T-Virus outbreak and silence any potential witnesses to their operation.

Retrieved from "https://capcom.fandom.com/wiki/Vladimir_Bodrovski?oldid=106270"
Community content is available under CC-BY-SA unless otherwise noted.