Viewtiful Joe is a anime series based on Capcom's action beat 'em up game series of the same name. The anime, comprising fifty-one episodes, was shown every Saturday on the Japanese television station TV Tokyo from October 2, 2004 until September 24, 2005. Viewtiful Joe was produced by animation company Group TAC. The producer for the video game franchise, Atsushi Inaba, and his team gave Group TAC its character designs for the video games, as well as original character designs for the animated series. The show was licensed by anime distributor Geneon Entertainment, with its episodes airing in United States on Kids' WB (only the first twenty-six episodes was aired in the United States), it was taken off the air when Kids' WB block transferred to The CW.

Viewtiful Joe was later licensed for distribution in other parts of the world by MGM Television. In 2009, Viewtiful Joe became available on Crunchyroll's streaming service for its users outside Asia.

The series follows a similar plot of the games, but there are many differences. Movie lover Joe and his girlfriend Silvia enjoy a seemingly normal trip to the movies to see an action flick starring Joe's idol, Captain Blue, when suddenly the leader of the evil Jadow force reaches out of the screen and takes Silvia into the movie. Joe is forced to follow her by Captain Blue's mecha, Six Majin (renamed "Machine Six" in the English anime, and "Six Machine" in the Spanish dub), and meets Captain Blue in the flesh who grants Joe the power to become an action movie hero in his own right called Viewtiful Joe.

Vol. 8
Add a photo to this gallery 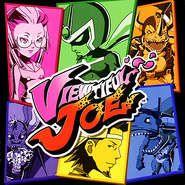 OST cover
Add a photo to this gallery

The 2005 game Viewtiful Joe: Red Hot Rumble is based on the anime, following its storyline and including several of its characters.

Retrieved from "https://capcom.fandom.com/wiki/Viewtiful_Joe_(anime)?oldid=132511"
Community content is available under CC-BY-SA unless otherwise noted.