An emotionless prototype assassin robot created by Bilstein to become the ultimate killing weapon that fights with a Plasma Gun. Vector's only directive is to seek and destroy every single human being.

While the Fourth Empire's elite warriors and Plasma Power wielders were the greatest in their ranks, Bilstein created Vector as a template for manpower specialized units when pit against armies, and especially when he would inevitably come across the Earth Federation Forces.

According to notes on Vector's development, a major hurdle to cross was figuring out the power generator of the unit. While an original Plasma Power generator was made, it was a bionic computer chip that could only hold energy for several hours before powering down. Through a grisly discovery by experimenting on POWs of the Earth Federation through forcibly activating their Plasma Power by inserting electrodes at vital points of the brain responsible for its manipulation, Bilstein was able to come up with a solution: He did not need the bio chip, imbuing the Vector units with pure Plasma Power would see it permanently embedded into its circuitry alone, powering it indefinitely. While the resistance of the human body saw his cadavers grow in Plasma Power units but unable to tolerate its generation, he came to the hypothesis that inorganic bodies were much more tolerable of being charged with Plasma Power.

Pleased with these results, Bilstein sends several of them when the Star Gladiators arrive onto Zeta. 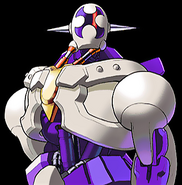 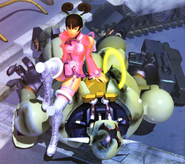 June sitting on Vector.
Add a photo to this gallery
Retrieved from "https://capcom.fandom.com/wiki/Vector?oldid=135499"
Community content is available under CC-BY-SA unless otherwise noted.