Valgas (ヴァルガス) is a fighting game character from the Power Stone series. He is the main villain of the original Power Stone game.

Valgas is a former soldier with great power, being able to defeat opponents only with the wind pressure from one punch or kick. Despite this, he is power hungry, and when he heard from one of his subordinates about legendary stones able to make any wish come true, he started searching for the Power Stones. In the game, he is fought in Avalon Island, and carries a Power Stone in a necklace, which is imbedded in his chest when transformed. He weighs 352 pounds, measures 7'10 and has a wrestling fighting style.

He is a very powerful character and quite fast. After the player defeats him, the power of the Power Stones transform him into a large monster. In his ending, Valgas finds the final piece of a broken Power Stone he had been seeking. He uses its magic to gain more power, but he is consumed by his greed and is transformed into an uncontrollable monster.

Valgas has blonde hair, red brows and red eyes. He only wears a blue pants with a yellow lightning design in both sides of his pants, black wrestling boots and white gloves with a pair of black bracelets on both of his wrist. He also wears a gun holster to his waist and wears a necklace with a red gem in the center.

In the anime, Valgas' appearance is much like a human as his eyes and brow are brown. The red gem on his necklace becomes enables him to see Falcon and his group's whereabouts while in Dark Land, and the dark Power Stone is kept inside of the red pearl. The gun holster that he wears is not seen, and sometimes he wears either a red vest or robe. When Falcon discovers his motives as well as he brutally defeats one of his wrestling teammates, his skin becomes darker as his eyes and brows were black while his brow becomes thicker instead of his original appearance in the game.

In Power Change mode, he has a demon-like appearance with horns on his head, his skin becomes black, and he has spikes on both of his shoulders. He now gained two pairs of spiked bracelets on both of his white gloves, his wresling boots has a spike motif on them, and has a red gem on the center of his chest. In the anime, while Valgas uses the Dark Stone, his Power Change form has minor changes as his skin changes to gray in addition he gains spikes at the center on his back and the spiked bracelets on his white gloves is now a pair instead of two and the red gem on his chest is now black unlike his game appearance.

PS (Power Stone) Energy - Valgas enables his opponent by hitting with a beam that comes from the Power Stone in his chest.

Meteor Chain - Valgas creates a electric blasts at full range to his opponent.

Final Valgas is the final boss of the game. He shoots lasers from his mouth, homing missiles from his back, and uses his large arms to smash the player. He is also playable after unlocking him. This feature was not available in the Arcade game, and he is only available in Training and Versus modes.

In the anime, Valgas while in Power Change form after hitting Ayame with a PS Energy beam, he demonstrates the usage of the Dark Stone as his body is mutated into a blob even his outfit is shredded to become much enormous and his appearance is a gigantic blob monster.

In the anime, Valgas was originally from Dark Land and is a well-known beatboxing champion. He grew up as an orphan. He wished for ultimate power and was granted a Dark Stone, which made him very powerful. He eventually began using the power of the stone to become a champion.

At first, Falcon was a really big fan of Valgas, who was known worldwide as a great fighter, until Falcon learns in the later episodes that Valgas was really a wicked man since the Dark Stone twisted his soul. He does not appear again until the end of the series. Eventually, he invites all the people Falcon has met throughout the series who are known to possess the ability to Power Change with their Power Stones to his island.

During the confrontation, he transforms to his Power Change form against Falcon from his Dark Stone until his father Pride, Apollis and Ayame arrives and Valgas finally tells his past. After that, he angrily attacks Pride with a PS Energy Ray due to his comments and Ayame manage to protect Pride and she was hit by it. Falcon gets angry to see what he has done. Rouge attacks him and Ryoma tells him to give up even Gunrock, Galuda and Wang-Tang in their Power Change forms. Valgas demonstrates the use of the Dark Stone as he glows in a dark light and started to mutate himself into a gigantic blob monster known as Final Valgas and he easily defeats his friends by hitting them with a beam on his mouth even Jack attempts to attack him but failed and Jack gives Falcon the Red Power Stone and all of their Power Stones combined to form into the legendary Light Stone as Falcon transforms into a Light Whirlwind with the use of the Light Stone to defeat Valgas.

Falcon eventually defeats him and destroys his Dark Stone when all of the Power Stones combine their powers to form the Light Stone. He is then reverted back into a child after being defeated. Falcon then embraces the boy while assuring him that he is no longer alone. Valgas then smiles back at Falcon before fading away. 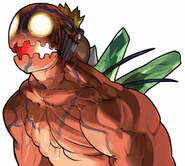