The Unknown Soldiers are the playable protagonists in Forgotten Worlds.

The Unknown Soldiers (名なしの超戦士, roughly "Super Warrior with no Name") are flying marines battling aliens accompanied by a floating satellite. Their ultimate goal is to destroy the evil goddess Bios of Dust Planet.

There were no actual names given for the first appearance of these characters; all were referred to very generically. Storywise, they were secretly trained from the time they were young boys by a group of humans to combat the evil on Dust Planet. The duo did not have any names other than "Superior Warriors", as shown in the ending. 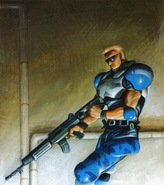 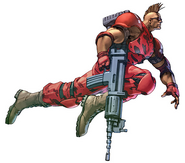 Unknown Soldier Blue crossover costume for Guile in Street Fighter V
Add a photo to this gallery
Retrieved from "https://capcom.fandom.com/wiki/Unknown_Soldiers?oldid=137320"
Community content is available under CC-BY-SA unless otherwise noted.