Yoshimoto Imagawa (also known as Orwik) is a character from the Sengoku BASARA series of action strategy games.

Ujimasa was allied with the Takeda and Imagawa clans, and sits in the beautiful castle of Odawara. Ujimasa wields a multi-bladed spear and his element is ice. Kotaro Fūma, the silent but deadly ninja, was always seen by his side before later serving Matsunaga Hisahide.

Ujimasa appears in Sengoku BASARA: Samurai Heroes and its update Sengoku BASARA 3 Utage. He is an NPC like in the past games, and lets Kotaro do the fighting. In Utage, he is playable.

Ujimasa Hōjō (北条 氏政) (1538 – August 10, 1590) was the fourth head of the late Hōjō clan, and daimyo of Odawara. He commanded in many battles, consolidating his clan's position, and retired in 1590. His son Ujinao Hōjō became head of the clan and lord of Odawara, but later that year, they failed to hold Odawara against the forces of Hideyoshi Toyotomi. Ujimasa was forced to commit suicide along with his brother Ujiteru. 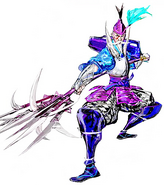 Sengoku BASARA Chronicle Heroes
Add a photo to this gallery
Retrieved from "https://capcom.fandom.com/wiki/Ujimasa_H%C5%8Dj%C5%8D?oldid=137886"
Community content is available under CC-BY-SA unless otherwise noted.