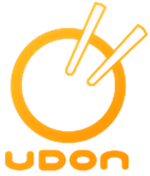 Udon Entertainment Corporation is a Canadian studio (or "art collective") of Asian-influenced comic book creators which provides creative services to the entertainment industry. It is named after a kind of Japanese noodle. The company is also a publisher of comic books, graphic novels, and art books, as well as English editions of Japanese manga and Korean manhwa titles. Erik Ko is its Chief of Operations. The studio is best known as the publisher of the Street Fighter comic book series. They also did artwork for some Capcom games, including Marvel vs. Capcom 2, Marvel vs. Capcom 3, Super Street Fighter II Turbo HD Remix, and others.

UDON appears to have begun operations in March 2001. It was affiliated for a few years with Studio XD. However, in March 2004, UDON announced a partnership to release comics under Devil's Due Publishing. UDON's first offering was the Street Fighter comic book series, launching in September 2003. They would add a Darkstalkers comic series to their line in November 2004. In October 2005, UDON reorganized its operations and began self-publishing. Erik Ko revealed that the lengthy break in the Summer of 2005 was to recover from a licensing deal with Capcom, which saw UDON doing artwork for Capcom Fighting Evolution. Although UDON appreciated the opportunity to work on the game, and to strengthen their ties with the video game maker, it taxed their resources, and left them behind schedule on their comics. In October 2005, UDON released Street Fighter II #0, the sequel to their Street Fighter comic; it was followed in early 2006 with the long awaited launch of Rival Schools.

In December 2007 at the New York Anime Festival, UDON announced that it would be publishing three new Street Fighter comic book series in 2008. These include Street Fighter II Turbo (12-issue series), Street Fighter Legends: Chun-Li (4-issue mini), and Street Fighter III (6-issue series). In November 2008, UDON announced they would publish a 4-issue mini-series of the upcoming Street Fighter IV game. “With the most anticipated Street Fighter game in years arriving 2009, we will be launching the SFIV comic series as a big crossover event with the game. That would mean the originally planned SFIII series will have to make way and be released after this SFIV story arc is done.” says UDON’s Chief of Ops Erik Ko. “We are working very closely with Capcom and the SFIV producer in Japan to make this comic series as exciting as possible. The stories from our comic are linked directly to the game, and it is a genuine extension that fans will definitely love. Also expect plenty of cross promotion and marketing between our comics and the game”.

In January 2009, UDON suprised fans with the announcement that they had acquired the rights to produce Final Fight comic books. They also continued the Darkstalkers storyline with a mini-series entitled The Night Warriors.

UDON has translated many original Capcom manga and artbooks, making them more widely available to English readers and art fans.

The Capcom Comic Book Universe refers to the comic book franchise developed by Udon, based on various Capcom franchises that shares the same continuity within the universe.

All the Capcom and Street Fighter related works made or published by UDON.

Mega Man Tribute
Add a photo to this gallery

Retrieved from "https://capcom.fandom.com/wiki/Udon?oldid=138136"
Community content is available under CC-BY-SA unless otherwise noted.