Tyrant R or known as T-0400TP is a enemy from the Resident Evil series of survival horror games. A part of the Tyrant series, it was an experimental subspecies of the T-103 Tyrant stored in Raccoon City. This B.O.W. first appeared in Resident Evil Outbreak: File 2 as a boss. It was equipped with various cybernetic components and carried a small but powerful explosive in its neck. It was also the type Ada Wong faced in Resident Evil: The Umbrella Chronicles.

Prior to the Raccoon City destruction incident, Hunters were being created in large numbers (via the Nursery, or by transportation) to combat the Tyrant in a number of strength tests with the superhuman strength and agility for the projects to killing the Hunter R. However, the Tyrant still hadn't been activated by the time of the outbreak, and the Hunters escaped. The Tyrant was to be combat tested against the Hunter R, however, due to the City-wide Virus Outbreak, this experiment was not conducted and the Tyrant's programming was not field tested, leading to an undiagnosed defect that enabled it to break free of its programming for an powerful Tyrant that appears in the Raccoon City were ever the Survivors found the Tyrant.

The Tyrant was activated in the early hours of October 1st by Umbrella scientist Carter to combat the renegade Hunter Rs roaming the facility. Just prior to the escape of the survivors in the lab, the Tyrant revealed its self-awareness, destroying the T-Virus vaccine and knocking both Linda and the detonator for its internal bomb off a catwalk. Without remorse it then killed Carter and proceeded to hunt down the remaining survivors.

After chasing the survivors, David King and Linda, through the ruined city and mutating into a more powerful stage, Tyrant R arrived at the highway overpass and was to attack David. Suddenly, Nyx grabbed hold of and absorbed it into its body. Nyx was destroyed by David and it was set free again. Not long after David King and Linda flees in the abandoned UBCS truck it confronted someone who was still alive in the Raccoon City.

On main street, the Tyrant's limiter was released due to damage and it underwent the "Tyrant Reborn" mutation. It was later absorbed by the Nyx on the highway, but survived even when Nyx was destroyed due to its incredible vitality and regenerative capacity. But the story continues when Ada Wong comes from the highway for eternity. Ada Wong is another fleeing survivor who happened upon the scene while trying to find a way out of the city, after a lengthy battle she managed to knock him out and flee. Not long after the battle, his body was destroyed with Raccoon City by missiles.

T-0400TP is a unique Bioweapon derived from T-103 Tyrant. Tyrant R displays intelligence unseen in most of its brethren. It has also been able to go into a fast state, along with absorbing damage, as seen in Resident Evil: The Umbrella Chronicles. In said game, it is revealed that this Tyrant can jump an amazing distance.

This Tyrant was equipped with various cybernetic components. it could be programmed for various objectives, and was outfItted with a small, but powerful explosive in its neck. its durability was far greater than that of other Tyrants, and even a Rocket launcher weapon would only knock it unconscious. rather than blow it to pieces, or even would not killed the Tyrant for eternity. It has an instant death attack in normal, hard and very hard difficulties. It is easily noticeable for the player because it will start to groan and balance its arms fast, cutting its victim multiple times in the process. During the sport period it is an ally, it can be hurt by the player, but it will not die until it goes berserk at the survivors. it can also injure the player or Al PC if they happen to get in its way while it's Attacking the Hunters.

During its "Tyrant R" mutation, rock-like growths were formed on the skin, providing extra protection. Being experimental, this model had an explosive device placed in its neck to be detonated in the case something unforseen transpired. If the virus is able to find a suitable host, it will dramatically increase one's size, strength, speed and agility. It will also lead to the massive development or reconfiguration of bone structures causing large claw-like formations to rise from the host's body. While t-Virus is rather advantageous to its host, it should be noted that the subjected host will be forced to endure a prodigious increase in adrenaline, causing the heart to expand and protrude through the chest. Furthermore, most of the original breeds of Tyrants were plagued with grotesque facial deformities, as well as an acute decline in intelligence.

During "End of the road", a player can kill the T-0400TP with the detonator on several occasions in order to obtain event check list points. Since the detonator is good for one use only, the level has to be played 3 times to achieve them all.

Tyrant R also appeared in Resident Evil: The Umbrella Chronicles. He battles against Ada Wong and gets defeated.

Tyrant R appears as a boss. 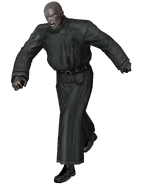 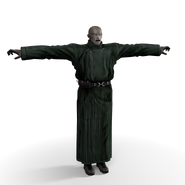 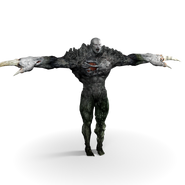 Tyrant R Form 1 By Tyrant 0400Tp
Add a photo to this gallery
Retrieved from "https://capcom.fandom.com/wiki/Tyrant_R?oldid=137755"
Community content is available under CC-BY-SA unless otherwise noted.