Twelve (トゥエルヴ, Tueruvu?, двенадцать) is a character in the Street Fighter series. He first appeared in Street Fighter III: 3rd Strike, and is voiced by Lawrence Bayne.

While he can theoretically take on virtually any form, Twelve's default appearance is a milky-white semisolid male human. His body is generally smooth and featureless. His head is equally smooth and sloped like a helmet with a pair of thin, black eyes set above an expressionless, narrow mouth. Though he can alter his shape, the transformation is not perfect: he will maintain his coloring even on details such as clothing.

Aside from copying his opponents' quips and uttering "target" and "complete", Twelve is only capable of expressing himself in a binary code cypher (00001 = A, 00010 = B, etc).

His victory speeches are:

Twelve is the ultimate result of Gill's "G-Project," a biological warfare operation headed by Dr. Kure and overseen by Gill's brother, Urien, whom Twelve considers to be his father. A mimetic genetic creation, Twelve is able to assume the forms of other people and change the shape of any part of his body to fit the task at hand. He is also extremely resistant to damage (which is not reflected in gameplay; he has the fourth lowest health of the entire Street Fighter III cast, after Akuma, Yun/Yang and Ibuki) and slavishly obedient, making him the perfect soldier.

Once Twelve was declared a success, mass production began, and the original was sent on a special mission: locate and retrieve Necro, the original G-Project prototype, and Effie, Necro's companion and the one who freed him from the laboratory. When Necro encounters Twelve, the latter is accompanied by several more of his "brothers" before he decides to fight Necro himself.

In his ending, Twelve is hinted to have gained sentience over his programmed obedience.

Twelve's unusual fighting style includes transforming his limbs into axes, spikes and other weapons. He is also the only character with an air dash, which can alter the arcs of his jumps. He can also "crawl" on the floor, allowing him to remain mobile while evading many ranged attacks. Twelve can also render himself invisible for a short time using his taunt. His X.C.O.P.Y. Super Art transforms him into a copy of the opponent, allowing him to use any of that characters' standard moves. 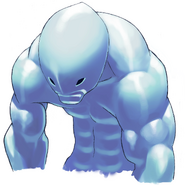 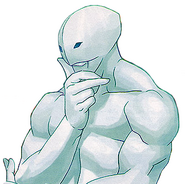 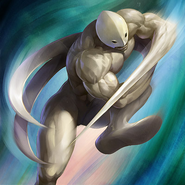 Add a photo to this gallery
Retrieved from "https://capcom.fandom.com/wiki/Twelve?oldid=131883"
Community content is available under CC-BY-SA unless otherwise noted.