Treble (Gospel in Japan) is a character from the Mega Man series of action platformer games. First appearing in Mega Man 7, he is the wolf robot partner to Bass and the equivalent to Mega Man's dog robot partner Rush.

Treble is Bass' robot wolf, or lion depending on the source. Like Rush, Treble can assume a jet-like form (as seen in Mega Man 8) and fly.

After Bass stole designs for the Rush Adapter during the events of Mega Man 7, Treble has been able to transform into an armored suit for Bass, the "Treble Boost". This gives Bass limited flight capability and increased firepower. 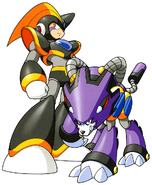 With Bass in Mega Man 8 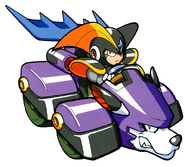 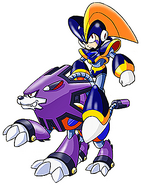 With Bass in Rockman Strategy