Top Man (タップマン, Tappuman?) is a character from the classic Mega Man series. He first appeared in Mega Man 3 as one of the Robot Master bosses.

He possesses the ability to spin around uncontrollably, and injure his opponent in the process. His original function was to entertain children. He was one of the eight Robot Masters that possessed a Power Crystal. He was created by Dr. Light and Dr. Wily.

After defeating Hard Man in Super Adventure Rockman, the room Mega Man is in fills with acid, and as Mega Man tries to climb up through the pillars of the room, Top Man fights against him. The game doesn't show what happens to Top Man after the fight, but he was probably melted in the acid like Hard Man, as Beat takes the Top Spin before it falls in the acid. If Mega Man loses, Top Man with shoot a top from an arm cannon, making Mega Man fall, but he is rescued by Rush and Cut Man and the continue scene will appear. Top Man and the other Wily Numbers are later revived by Ra Moon, and after Ra Moon betrays Dr. Wily, they help Mega Man by giving all their energy to him, becoming inactive after this.

In Mega Man 3 and Mega Man II, Top Man attacks by throwing three tops from his head, and spins to the other side of the screen, being invincible while spinning. He is weak to the Hard Knuckle. 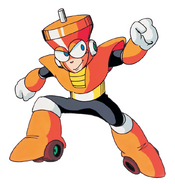