Tiger Road is a side-scrolling arcade action game released in February 1987 by Capcom and Victor Interactive for Commodore 64. A remade version for the TurboGrafx 16 was released in 1990 in Japan and North America. It is included in Capcom Classics Collection for the PlayStation 2 and Xbox and can be found on Vol. 2. 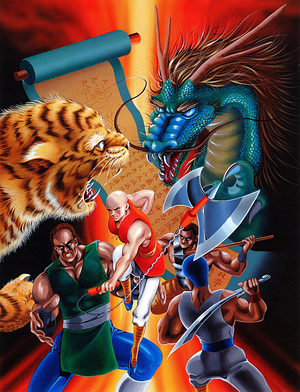 The evil warlord Ryuken has kidnapped the local children. It's up to Lee Wong and his fighting skills to fight for their freedom. He uses weapons and items along the way to boost his power and help the player in this epic quest.

Many levels are horizontally scrolling, although there are some with high ledges to jump onto and follow for a slightly different path. Magic urns containing improved weapons appear frequently. Most enemies are easy to attack and only need one hit to kill, although they may come at the player in large hordes.

Once the player gets to the indoor sections, he/she will find big enemies with the ability to kill with one hit, in sections set on multiple levels complete with stairways.

It is possible to play the game on single player, or on a two-player multiplayer mode.

Additionally, Tiger Road, like many other games during this era of gaming, credited its staff in its default Score Ranking Table, which is as follows: 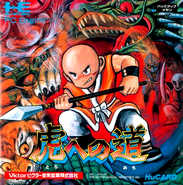 PC
Add a photo to this gallery

Retrieved from "https://capcom.fandom.com/wiki/Tiger_Road?oldid=137934"
Community content is available under CC-BY-SA unless otherwise noted.