Capcom Database
Register
Don't have an account?
Sign In
Advertisement
in: Articles with incomplete sections, Games, Shoot 'em up Games,
and 6 more

The Speed Rumbler, known as Rush & Crash (ラッシュ アンド クラッシュ, Rasshu ando Kurasshu?) in Japan, is a 1986 Japanese arcade game that was released in North America a bit later the same year. A port is included in Capcom Classics Collection Vol. 2 for the PlayStation 2 and Xbox.

In 21st Century America, there exists a gang of terrorists known as Zapper (ザッパー, Zappā?), dedicated to attacking peaceful towns simply because they want to do their best committing crimes. In one of their raids they attack the home town of the main character, Top (トップ, Toppu?)[1][2] (named Super Joe in English[3] and given no name in Europe[4]), and kidnap their wife, children and all other townspeople. A Special Forces soldier, Top embarks on a rescue mission to save everyone and bring peace back to his home town. Commanding an armored Pursuit Vehicle AMT (Armor Transom) (追撃用車輌AMT( アーマートランサム), Tsuigeki-yō Sharyō Āmā Toransamu?) outfitted with guns, Top must blast his way through enemy areas while on the rescue mission. If the vehicle takes too much damage, Top can hop out and continue the fight on foot.

The Speed Rumbler, like many other games during this era of gaming, credited its staff in its default Score Ranking Table, which is as follows:

However, a secret ending sequence can be activated by holding 1P Start, 1P Left and 1P Button 2 after the ending text appears:[10] 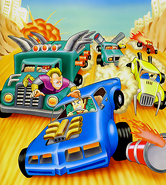