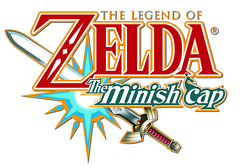 The Legend of Zelda: The Minish Cap, known in Japan as Zeruda no Densetsu: Fushigi no Bōshi (ゼルダの伝説 ふしぎのぼうし, lit. The Legend of Zelda: The Mysterious Cap?), is an action-adventure game and the twelfth entry in Nintendo's The Legend of Zelda series. Developed by Capcom and Flagship, with Nintendo overseeing the development process, it was released for the Game Boy Advance handheld game console in Japan and Europe in 2004 and in North America and Australia the following year.[1] In June 2014, it was made available on the Wii U Virtual Console.

The Minish Cap is the third Zelda game that involves the legend of the Four Sword, expanding on the story of Four Swords and Four Swords Adventures. A magical talking cap named Ezlo can shrink series protagonist Link to the size of the Minish, a bug-sized race that live in Hyrule. The game retains some common elements from previous Zelda installments, such as the presence of Gorons,[2] while introducing Kinstones and other new gameplay features.

The Minish Cap was generally well received among critics.[3] It was named the 20th best Game Boy Advance game in an IGN feature,[4] and was selected as the 2005 Game Boy Advance Game of the Year by GameSpot.[5]

The Minish Cap is also the final Zelda game made by Flagship Co., Ltd. before they ceased production in 2007.

The Minish Cap retains the general gameplay features that were present in previous Zelda installments.[6] The main protagonist, Link, must navigate several dungeons to obtain an item or enhancement at the end of each dungeon that is pivotal towards the quest. Each of the game's "bosses" are defeated using the item acquired in the boss's dungeon. The game also includes multiple "side quests"—optional tasks that are not part of the main quest but rewards for completion are beneficial to the player.[7] Recurring characters in the Zelda series make appearances and some form part of side quests; for example, Tingle and his brothers must all be contacted by the player to earn a reward.[8]

The Minish Cap features a number of enhancements that benefit from the more powerful Game Boy Advance platform.[9] The game's camera angle is much closer to the ground, allowing more detail. In the overworld and in dungeons, the game replaces the traditional item interface of the handheld Zelda games with pictures associating items or actions with buttons,[10] similar to the item interface in 3D titles like Ocarina of Time and The Wind Waker. Enemies include familiar creatures from the Zelda universe.[6] Link can also perform special actions present in the 3D Zelda games, such as rolling while running.[11] Along with returning items such as Bombs, Arrows and Pegasus Boots, The Minish Cap introduces three new items: the Mole Mitts, the Gust Jar, and the Cane of Pacci. The Mole Mitts allow Link to dig through dirt barriers to explore new areas, the Gust Jar can suck in nearby items and substances and can be used to suck up certain enemies and fire them as projectiles, and the Cane of Pacci can flip certain objects over and allow Link to launch himself out of holes in the ground.[12] The game advances the combat system from previous handheld installments by allowing Link to learn new sword techniques throughout the game, some of which are techniques from previous games and some of which are new.[13] As the game progresses, Link will collect Elements that fuse with his sword, allowing him to make copies of himself using glowing floor panels, used to solve puzzles such as pushing large blocks or hitting multiple switches simultaneously.

Kinstones are special artifacts which Link can find throughout his quest. Kinstone pieces are fragments of a medallion that are found throughout the course of the game. If the player can find a character or object with a Kinstone piece (indicated by a thought bubble above their heads), the player can try to fuse their Kinstone piece with one of their own to make a match. If a successful fusion is made, something will occur somewhere within the game's world, including the placement of treasure chests, access to secret areas and certain events which occur among certain characters.[14] Whilst many Kinstone fusions are optional, some fusions, such as those which use Golden Kinstones, are necessary to advance the story.[15]

The Minish Cap also features a figurine-based sidequest, similar to that in The Legend of Zelda: The Wind Waker.[16] The player can collect "Mysterious Shells" like those found in hidden areas in Link's Awakening, which sometimes appear when defeating enemies and can also be found or bought in different locations throughout the world. These can then be used in a gashapon-like machine in Hyrule Town to obtain figurines of characters, enemies or locations that Link has encountered in the course of the main quest. New figurines only become available once Link has met or killed the subject of that figurine. Each figurine has a short description revealing information about the game, that particular enemy's weaknesses, or the series in general. Collecting every figurine unlocks a house in Hyrule Town that contains treasure, a Piece of Heart, and the Sound Test.[17]

As a prequel to Four Swords, the plot of The Minish Cap revolves around the backstory of Vaati and the birth of the Four Sword, which were important elements of Four Swords and Four Swords Adventures.[18][19] The Minish, also referred to as the Picori by the Hyruleans, are a race of tiny creatures that bestowed a young boy with a green garment, a sword, and a shining golden light to drive back the darkness many years before the game is set.[20] There are three types of Minish: Town, Forest, and Mountain.[21]

The quest begins when Link is chosen by the king of Hyrule to seek the help of the Picori after Vaati had destroyed the Picori Blade and petrified Princess Zelda. With the blade shattered, evil monsters were released into Hyrule and Vaati was able to create chaos in his search for the Light Force. Link was chosen because only children can see the Picori.[22] On the voyage he rescues Ezlo, a strange being resembling a green cap with a bird-like head, who joins him and can make Link shrink to the size of the Minish. Although it is not revealed at first, he and Vaati are Minish (Picori)—Ezlo a renowned sage and craftsman and Vaati his apprentice. Vaati became corrupted by the madness and hatred of men and took a magic hat Ezlo had made for the people in Hyrule.[23] The hat grants any wish made by the bearer, and Vaati wished to become a powerful sorcerer. Vaati then turned his old master, who had tried to stop them, into a hat. With the help of Ezlo, Link retrieves the four elemental artifacts and uses them to restore the Picori Blade to the Four Sword,[24] capable of defeating Vaati.[25]

After Link restores the Four Sword, Vaati turns Hyrule Castle into Dark Hyrule Castle—the final dungeon in the game. Link fights Vaati just before he can drain Zelda of all of the Light Force hidden within her. Link defeats Vaati after engaging in a fight that consists of Vaati changing forms. When Link and Zelda flee from the collapsing castle, they meet Vaati as he again changes form for the final battle of the game. After the battle, Ezlo returns to his original form.[26] He finds the cap of wishes he created and gives it to Zelda, granting her a wish. The people cursed by Vaati are cured and the castle is turned back to normal. The hat overflows with the power of life and disappears. Ezlo gives Link a new hat and tells him that he enjoyed traveling with him, then leaves just as the door to the Minish world closes.[27]

After Capcom and its scenario writing subsidiary Flagship had finished developing Oracle of Seasons and Oracle of Ages for the Game Boy Color, they began work on a new Zelda game for the Game Boy Advance.[28] Work on the title was suspended to allow the teams to focus on Four Swords, but in February 2003 Shigeru Miyamoto and Eiji Aonuma announced that development of what would later be called The Minish Cap was "well underway".[28] Nintendo launched a Minish Cap website in September 2004, showing concepts of Link's shrinking ability.[29] The game had a cartoonish art style similar to The Wind Waker, as it has a fairy tale setting similar to said game, within "the world of tiny fairies, a universal fairytale story".[18]

A first in the Zelda series, the game was released in European territories before North America. The main cited reason for this was the Nintendo DS: with the European DS Launch scheduled for Spring 2005, Nintendo of Europe pushed to make Minish Cap its handheld Christmas "killer app". Conversely, Nintendo of America held back on its release so not to "cannibalize" the DS market.[30] The game is included in the list of Game Boy Advance games that is now available for download for the Nintendo 3DS's Virtual Console by Nintendo 3DS Ambassadors.[31]

In Europe, the game was available either as a standalone packaged game, or as part of a special pack, which included one of only 25,000 limited edition, Zelda-themed Game Boy Advance SP. The Triforce SP is matte gold in color, with a Triforce logo stamped on the lid, and the Hyrule royal family crest printed on the lower right face.[32] As a launch promotion, Nintendo Europe also produced seven 24-carat gold plated Game Boy Advance SP consoles, with six given away to people who found a golden ticket inside their Triforce SP package, and a seventh as a magazine promotion.[33] Thirty were autographed by Miyamoto himself at the opening of the Nintendo World Store in New York.[34]

The game received critical acclaim. IGN praised the game for continuing the legacy of the successful series, while GameSpot also praised the game for this aspect, saying "Classic Zelda gameplay and flavor will please fans".[6] The graphical style especially—which continues the whimsical style of Wind Waker—was welcomed by most reviewers. The music of the game was commended by most sites; GameSpy stated that "Even the music is outstanding, featuring some of the highest quality tunes to ever come out of the GBA's little speakers".[7] Despite the criticism of the dungeon lengths, 1UP.com praised the dungeon design, proclaiming it as superior to that of other Zelda games.[44]

The main criticism of the game among reviewers is the length of the game. Eurogamer says that "It's too short",[45] while RPGamer state that "The typical player can fly through the game's six relatively short dungeons in about ten hours".[46] There are also various other complaints from reviewers: IGN claims that the kinstone system is overly repetitive;[9] Nintendo World Report criticises the game's visuals on a Game Boy Player,[47] and RPGamer details the game's low difficulty level as a disadvantage.[46] Despite this, IGN's Craig Harris liked the way that the ability to become tiny had been incorporated to create fresh puzzles in the Zelda series. He continued to comment that "It's an idea that's so well-conceived that I'd love to see worked in the series' 3D designs somewhere down the line".[4]

The Minish Cap won the 'Best Game Boy Advance of 2005' by GameSpot over such finalists as Fire Emblem: The Sacred Stones and WarioWare: Twisted!; GameSpot labelled it as "the Game Boy Advance game we remember the most".[5] In March 2007, the game was ranked as the 20th best Game Boy Advance game by IGN. In the acknowledgement, IGN commented that "The inclusion of the ability to shrink and grow was explored to some really good results."[4] The game was ranked 47th in Official Nintendo Magazine's "100 Greatest Nintendo Games" feature.[48] Minish Cap received an average score of 90 percent from GameRankings, a site that compiles media ratings from several publishers to give an average score.[3]

Retrieved from "https://capcom.fandom.com/wiki/The_Legend_of_Zelda:_The_Minish_Cap?oldid=129196"
Community content is available under CC-BY-SA unless otherwise noted.