Capcom Database
Register
Don't have an account?
Sign In
Advertisement
in: Games, Beat 'em up Games, Fantasy Games,
and 9 more

The King Of Dragons 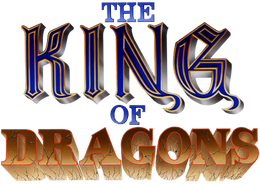 Up to 3 (arcade version) or 2 (SNES version) players simultaneously

The King Of Dragons (ザ・キングオブドラゴンズ, Za Kingu obu Doragonzu?) is a side-scrolling hack 'n slash beat 'em up game developed by Capcom and released in 1991 for the arcades. Set in a fantasy setting, players choose from five characters (Elf, Wizard, Fighter, Cleric, and Dwarf) in order to travel through the fictional kingdom of Malus and defeat the monsters that have taken over, as well as their leader, the red dragon Gildiss.

The setting is very similar to that of Dungeons & Dragons and other medieval fantasy worlds, with familiar monsters such as Orcs, Gnolls, Harpies, Wyverns, Cyclopes, and Minotaurs. The King Of Dragons was ported to the Super Nintendo Entertainment System (SNES), added as one of the featured games in Capcom Classics Collection Vol. 2 in 2006 and later included in Capcom Beat ’Em Up Bundle in 2018.

Much like Capcom's Knights Of The Round, The King Of Dragons features an RPG-like level advancement system. Points scored for killing monsters and picking up gold count towards experience, and the character gains levels at regular intervals. With each level, the character's health bar increases, other attributes such as range improve, and the character also becomes invulnerable for a few seconds. Along the way, different weapon and armor upgrades for each character may also be picked up. The game has 16 levels, though many are quite short.

The King Of Dragons features a simple control system that consists of a single attack button, and a jump button. By pressing both buttons, the character unleashes a magical attack that strikes all enemies on the screen (its strength varies according to the character used) at the expense of losing energy. The fighter, cleric and dwarf can also use their shield to block certain attacks by pulling back right before the impact.

The story below is as explained in the SNES manual. It is worth noting this version is a lot more detailed than the Japanese original, and elements such as Guindon, the king and the name of the land not featured or referenced in the original text.

"For over a hundred years, he had descended like a vulture on the land of Malus and left nothing behind but a scorched ruin where the creatures of darkness could reign. After much pleading by the farmers and townspeople, the armies of Malus were gathered and sent to do battle with the mighty red dragon known as Gildiss. Not a single man returned.

In desperation, the King sought guidance from his wizard, Guindon. Guindon told the king that he could cast a spell that would put Gildiss to sleep for one year, but if and when Gildiss awoke, he would be more powerful. Looking out over the suffering that had befallen his kingdom, the King decided his people could take no more. And so he commanded Guindon to put Gildiss to sleep.

Now the year has almost come to an end and darkness has once again befallen the kingdom of Malus. In the last year, the King has sent forth hundreds of knights to find and destroy Gildiss as he sleeps. None have been heard from again.

Now, as the creatures of darkness stand ready to plunge the land of Malus into the abyss, a new band of adventurers plans to set forth before Gildiss awakes..."

Although characters are only referred by their profession in the actual game, their names were revealed in Japanese side material[1] and eventually the SNES port's manual.[2] Main characters


Based on their known roles, a proper staff roll would closely resemble the following:


The King of Dragons, like many other games during this era of gaming, credited its staff in its default Score Ranking Table, which is as follows: 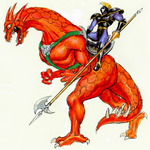 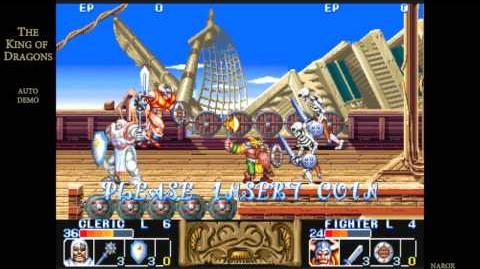