Tango is a supporting character from the classic Mega Man series.

A cute robotic cat, and one of Mega Man's more useful allies, Tango debuted in Mega Man V. Tango can change himself into a buzzsaw and dive into enemies. Tango returned in Rockman & Forte: Challenger From The Future for the WonderSwan and was featured in Mega Man 10. Despite his small number of appearances, he has a large fanbase.

In Mega Man V, Tango rolls toward the screen to attack enemies. Tango vanishes when the energy is depleted, when falling into a pit, or when the player leaves the room where Tango was used. He functions much the same way in Challenger From The Future.

In Mega Man 10, Tango has a cameo, napping (sometimes playing) on the counter of Auto's item shop when playing as Proto Man.

Tango is also a Navi Customizer program in the MegaMan Battle Network series, shaped like a green cat with a bandage roll on its head. When equipped, Tango appears once during each multiplayer NetBattle to heal the player and give them a barrier. He is available from MegaMan Battle Network 3 to 6. While there is no official artwork of the Tango program from Battle Network, there is concept art.

The Tango program also appears in Battle Memory from Rockman ×over. 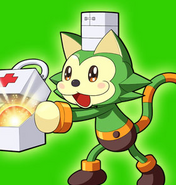 Rockman Xover Tango program
Add a photo to this gallery
Retrieved from "https://capcom.fandom.com/wiki/Tango?oldid=108295"
Community content is available under CC-BY-SA unless otherwise noted.