Tadakatsu Honda, or Iron Ox, is a character from the Sengoku Basara series. He is a giant clad in thick armor draped with gold prayer beads and iron antlers protruding from the helmet, possessing great strength in each of his blows. He is most closely associated with Tokugawa Ieyasu, and sometimes lets him sit on one shoulder. He cannot talk, so players don't know what he is thinking unless they can translate the noises he makes, sometimes written as long lengths of exclamation points. He wields a huge drill-spear, with which he can do a considerable amount of damage and his element is lightning. 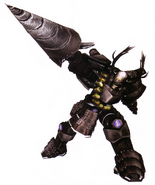 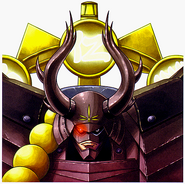 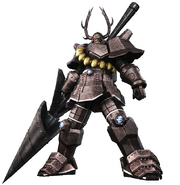 Sengoku Basara: Samurai Heroes
Add a photo to this gallery
Retrieved from "https://capcom.fandom.com/wiki/Tadakatsu_Honda?oldid=53590"
Community content is available under CC-BY-SA unless otherwise noted.