TEPPEN is both a real-time and turn based card game. By default, the game is played in real time where "Unit Cards" are placed on the field to deal damage to the enemy Hero, the opponent can then place another Unit Card on the same row to block the incoming damage and protect their Hero.

When an "Action Card" is used, the game will then turn into a turn based system where players have to wait for their opponent to play a card or select "Resolve" to go back to the real-time gameplay.

Aside from the cards, each Hero has three special abilities dubbed as "Hero Art", these Hero Arts are powerful abilities that can turn the tide of battle quickly with their high burst of damage or healing capabilities. Only one Hero Art can be selected when creating a deck of cards, and only 30 cards are allowed in one deck.

All Heroes in the game will have 30 HP regardless of their level. There are currently three ways to win a match in TEPPEN, by either taking the enemy into 0 HP, having a higher HP number than the opponent when the time runs out, or when the opponent runs out of time while under the effect from Monstrous Virus (DON 075). 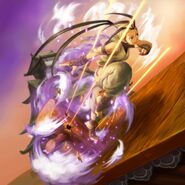 Ibuki artwork.
Add a photo to this gallery

Retrieved from "https://capcom.fandom.com/wiki/TEPPEN?oldid=141224"
Community content is available under CC-BY-SA unless otherwise noted.