Susano is a character from the Ōkami series of action adventure games. He is the direct descendant of the legendary hero Nagi, the husband of Kushi and the foster father of Kuni.

Susano is initially shown as a lazy, alcohol-loving warrior who dreams about Kushi and who wants to distance himself from the greatness of his ancestor. He can be found sleeping in various areas throughout the first half of the game, claiming to be "meditating" or "training." However, he will go to great lengths to improve himself and to defend those he loves.

He is known to have high faith in the gods, beside the fact that he was furious with them at first when he is stuck being Nagi's descendant. He is able to see Amaterasu's marking since the beginning, much to Issun's surprise.

Susano is in fact, not very bright. He is highly self-proclaiming despite his bad language and choice of grammar. For example, in Ōkamiden, the post sign in front of his house says "Home of Susano, the World's Bestest Swordsman".

The top of his head is bald and framed by black hair that sticks up on either side, and he has a full beard that connects to his large, single eyebrow. Susano has a prominent red nose and beady, white eyes, with three lashes on each. His clothes are extremely similar to Kuni's. He wears a simple, sleeveless, purple outfit with a red belt and simple black shoes. Around his neck is a necklace sporting a large, green magatama. Susano has short, stubby legs, large, hairy forearms and hands, and small biceps. His sword, Tohenboku, is a simple wooden sword with a little twig adorning a leaf on it.

Susano claims to be a descendant of the hero Nagi. He seems to be proud of this, but it causes others to expect more of him than what he is capable of. This compels him to enter the Moon Cave, where he draws the sword Tsukuyomi to prove that the legend is "nothing but a fairy tale." Unfortunately, the legend proves true, and his actions result in Orochi's resurrection. He flees to Kamiki and blocks the entrance.

He later cleaves the rock in two with Amaterasu's secret assistance. Deciding to take on the monsters infesting Nippon, Susano departs. With the player present, he soon finds that he is suddenly able to slice through anything and credits the change to his sword, believing it is possessed. He later believes that the apparent increase in power is the work of the gods, "dogging his steps" as punishment for releasing Orochi and imploring him to set things right. He goes to pray for an increase of power at the Gale Shrine, but he is unable to get past Crimson Helm's barrier and instead falls asleep at the entrance. The ghost of Yatsu, the head priest of the shrine, notes there is a 'dark power' preventing him from using his inner eye to look into Susano's dreams, hinting that Orochi is actually the one bothering Susano.

Susano rushes into the shrine when the barrier is lifted and appears when Crimson Helm summons eight Orochi heads to attack Amaterasu. Susano slices the heads with Ammy's help and, once she conjures up some wind, uses a secret technique to cut Crimson Helm's head into several pieces, showing that he is capable of performing great acts if needed. However, he is still disturbed and rants at the gods. He goes back to Kamiki and holes himself up in his house on the night of the Kamiki Festival, which just happens to be the one-hundredth anniversary of the slaying and imprisonment of Orochi by Nagi and Shiranui. When Amaterasu comes back to Kamiki, she finds out that Susano has drunk all the 8 Purification Sake. While the villagers try to see what was his reason to do so, he reveals that he was the one to free Orochi. He then refuses to come out even after Kushi is chosen as Orochi's sacrifice. However, once Amaterasu enters the Moon Cave to search for Kushi, Susano can be seen hiding behind a rock at the entrance.

Susano eventually comes through, however, rushing to the Moon Cave to assist Amaterasu and rescue Kushi. Upon meeting Orochi, he admits to his crimes and refuses to pray to Orochi and unleash the beast's power, and he, with Amaterasu's assistance, cuts off seven of Orochi's heads and bisects the eighth without help, just as his ancestor had previously done. He then rescues Kushi as they both admit their love for each other, and during the Kamiki Festival, they spend the night in the Cave of Nagi, where Susano reveals that he's been able to see Amaterasu's true form all along. After his fight, he spends the rest of his time in Kamiki Village.

Susano appears early in the game. He is now Kushi's husband and Kuni's father and is looked upon as a hero in Kamiki Village. It appears he has blocked the entrance to the village with a large boulder to prevent anything from entering or exiting the village as he does in Ōkami. The first time Chibiterasu encounters Susano, he says he recognizes him. However, Issun will deny this, saying that there isn't one white puppy in the whole world.

After pairing up with Kuni, Chibiterasu was told to give Susano some of Kushi's sake, which he naturally drunk and passed out. The duo then cut down the boulder Susano placed, and headed off to Shinshu Field. However, they failed to enter Hana Valley due to the locked gate requiring a great amount of manpower; then, Susano came to take Kuni home, but once the boy explained the quest he was on, he opened the gate for the two and held it open until their return with the mirror they have been asked to look for.

Later on, when Chibiterasu and Kurow traveled back 9 months into the past to stop Akuro from bathing in Orochi's blood, they encountered Susano on his way to kill Orochi, but deterred by the barrier on the Moon Cave's entrance. It was then that Susano found an unconscious Kuni floating in the water, and swam out to rescue him. After leaving Kuni in the care of Mika, Chibiterasu helped Susano dispel the barrier blocking the entrance, allowing Susano entrance. Later, Chibiterasu met Susano at the back path overlooking the throne room; however, Susano was too scared to fight Orochi. This resulted in Chibiterasu and Kurow shoving Susano down to the throne room, and in the end defeated Orochi and saved Kushi. Finally, in the game's ending cutscene, Kuni told Susano and Kushi that he wanted to look for his true origin. This angered Susano, who said that if Kuni leaves, he would no longer be his son. After Chibiterasu and Kuni left, Susano began to cry. Kushi comforted him, telling him that Kuni would eventually come back to them, and that she was pregnant. Susano was shocked at first, but then laughed, and prayed to the gods to look out for Kuni on his travels. 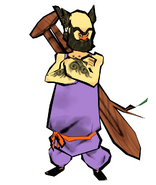 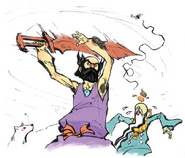 With Amaterasu and Mr. Orange.
Add a photo to this gallery
Retrieved from "https://capcom.fandom.com/wiki/Susano?oldid=123096"
Community content is available under CC-BY-SA unless otherwise noted.