Capcom Database
Register
Don't have an account?
Sign In
Advertisement
in: Games, Fighting Games, Versus Games,
and 7 more 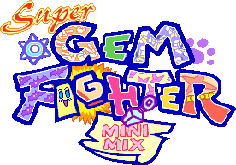 Super Gem Fighter Mini Mix was ported to the PlayStation (which retained the Pocket Fighter title for its American and European release), Sega Saturn, and WonderSwan, as well as PlayStation 2 as part of Street Fighter Alpha Anthology. It was later included in Capcom Fighting Collection.

In addition to the standard fighting, there are various gems the player can collect during matches to power up their character (based on Red Earth), as well as elemental orbs which can be thrown to the opponent in a variety of angles (visually based on elemental hits in Darkstalkers), which may affect the opponent (turn into stone, freeze, etc.). Each character starts each match with one of these (Tessa, for example, always starts with the ice orb).

There are two bars and three sub-bars in the interface. The two main bars are the life bar and the super bar, the first indicates the character's health and the second their ability to perform "Mighty Combos". The Mighty Combo gauge itself can be filled up to 9 stocks. Each Mighty Combo has a level assigned to it, which determines how many "Mighty Combo" gauges it will need.

The three sub-bars at the bottom corners of the screen displays the level of three of the character's special moves. Each character has at least three special moves, as shown in the sub-bars, and each of these corresponds to a color. Some characters have one or two additional Special Moves that aren't affected by sub-bars. Each time an attack connects to an opponent, gems pop out of him or her, and which can then be taken to power up the corresponding special moves.

There are four buttons: Punch, Kick, Special, and Taunt. The Special button performs a chargeable move that cannot be blocked and upon impact drops gems in the opponent's possession. More gems will be dropped depending on how much the Special attack is charged. Holding Down, Forward or no direction at all when using the Special button will cause a specific gem color to drop from the enemy. Holding Back along with the Special button allows for a defense that is specific against the unblockable Special attacks. Other kinds of attacks do no damage when blocked, and unlike most 2D fighting games, this includes special moves and Mighty Combos.

Gem Fighter also features "Flash Combos", or "Costume Combos", where the player can perform a combo by pressing the Kick or Punch button after striking their opponent with the Punch button for a total of four hits. Flash Combos will usually cause a character to change into various costumes during the sequence (except for Ryu), and perform a powerful attack in the end - this final hit is usually the hardest in the sequence to connect with. These costumes range from uniforms (such as traffic cops or schoolgirls), to swimsuits, and even cosplays of other Capcom characters. For example, Chun-Li may turn into Jill Valentine from Resident Evil, while Felicia may turn into Mega Man or other Darkstalkers characters not playable in the game.

The commands are also very easy compared to the Street Fighter series thanks to Special button. By doing a motion (for example: qcf or hcf) and pressing Special Button will make a fighter perform their Mighty Combo.

The characters may float on a magic cloud through the upper reaches of the stage and, if hit, drop items.

This lists all Capcom characters that appeared in the game as themselves, or at least an item that is affiliated or referenced to him/her.

GameRankings gave the PlayStation version of the game 73%.[1] In 2011, Complex ranked Super Gem Fighter Mini Mix as the 42nd best fighting game of all time.[2] 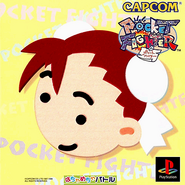 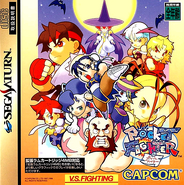 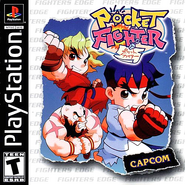 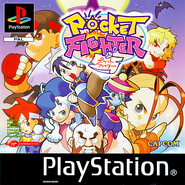 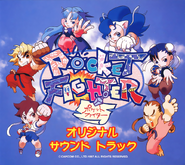 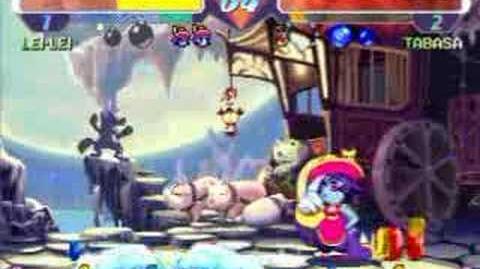