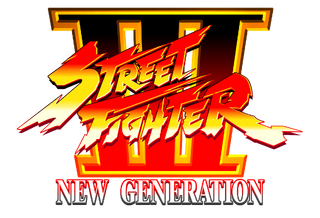 Street Fighter III: New Generation (ストリートファイターⅢ, Sutorīto Faitā Surī?) is a 1997 fighting game released for the arcade and the first game in the Street Fighter III series. The game was produced for the CD-ROM-based CPS III hardware, which allowed for more elaborate 2D graphics than the CPS II-based Street Fighter Alpha games, while revamping many of the recurring gameplay features. The game, which was designed as a direct sequel to the Street Fighter II series, discarded all the original characters, with the exception of Ryu and Ken, with an all new character roster led by Alex (hence the "New Generation" subtitle). Likewise, a new antagonist named Gill took over M. Bison's role from the previous games as the new boss character.

The gameplay of the original Street Fighter III is based on Super Street Fighter II Turbo, but with several new abilities and features introduced. Players can now dash or retreat like in the Darkstalkers series, perform high jumps and do a quick standing after falling from an attack. The game also introduced "leap attacks", which are small jumping attacks used against crouching opponents. However, the player cannot block in the air like in the Street Fighter Alpha series.

The other new feature is the ability to "parry" an opponent's attack. Parrying, or "blocking" which is the term used in the Japanese version, is the ability to evade an incoming attack without receiving damage. At the exact moment an opponent's attack is about to hit their character, the player can move the lever forward or down to step aside without receiving damage, leaving the opponent vulnerable for a counterattack. Additionally, this also allows the player to defend against special moves and even Super Arts without sustaining damage or filling up the stun gauge, which is what happens when a player blocks a special move with the regular defensive stance. However, parrying an attack requires precise timing.

2nd Impact introduces a few new features to the Street Fighter III series. In addition to a Super Art, the player can also perform slightly more powerful versions of their Special Moves called EX Specials. By using a certain portion of the Super Art gauge (usually after the filled portion begins to flash), the player can power-up certain Special Moves when performing the command by pressing two or three attack buttons instead of just one. A similar type of special move was featured in the home version of Street Fighter: The Movie (Super Special Moves). Other new abilities added to the game are "grap defense", the ability to escape from a throwing attack, and "personal action", a character-specific taunt. Each character's personal action is also accompanied by an additional benefit if completed successfully; for example, Ryu's personal action will lower his stun gauge. If a second-player interrupts the gameplay to challenge the other player, then the first player will be allow to change the Super Art of their selected character.

The single-player mode was changed slightly from the first game. The player faces against series of eight opponents, including a character-specific final opponent, who will exchange dialogue with the player's character before the match. If certain requirements are met, then the player will also face a rival character during the course of the single-player mode and exchange dialogue before a match. If certain other requirements are met, the player will also face against the CPU-controlled Akuma instead of the character's usual final opponent in the single-player mode and depending on the player's performance in their fight against Akuma, then a match against a more powerful version of Akuma know as "Shin Akuma" will also take place. 2nd Impact brings back the concept bonus rounds, which was last seen in Super Street Fighter II. At the end of the third CPU match, then the player will participate in a minigame dubbed "Parry the Ball", in which the player can practice their parrying skills against a series of basketballs thrown towards the player by Sean.

Double Impact (Street Fighter III: W Impact in Japan), released in 1999 for the Dreamcast, was a compilation containing the original game and 2nd Impact. The compilation features an Arcade, Versus, Training and Option Mode for both games, as well as a "Parry Attack Mode" in 2nd Impact, where the player gets to test his or her parrying skills in the game's bonus round. Gill (in both games) and Shin Akuma (in 2nd Impact only) are now playable, unlike the arcade version. 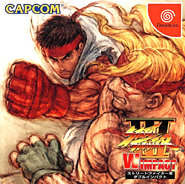 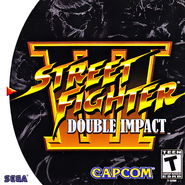 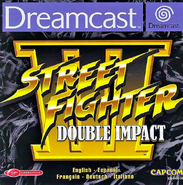 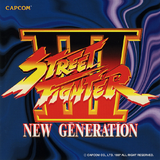 Promotional artwork for Double Impact for the Dreamcast.