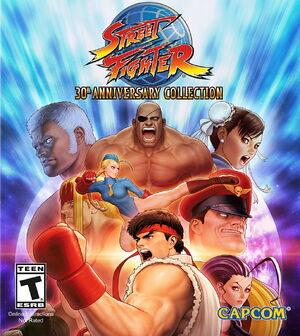 Street Fighter 30th Anniversary Collection is a bundle of twelve fighting games in Capcom's Street Fighter franchise. First announced at Capcom Cup at the 2017 PlayStation Experience event, it celebrates the series' 30th anniversary. It was released for the PlayStation 4, Xbox One, Nintendo Switch and Windows on 29 May 2018 in Europe and America, and it will be released later on October 25 in Japan.

The bundle contains the following games.

While playing a single-player mode in any of the twelve games, the player can use save states to save and resume at any time.[1][2] Four of the games (Turbo: Hyper Fighting, Super Turbo, Alpha 3, and 3rd Strike) support online multiplayer, including ranked matchmaking.[2] Online lobbies can support up to four players and a player can fight against a CPU opponent while waiting for online battles to be ready.[2] The Nintendo Switch version of the game includes an exclusive eight player tournament mode for Super Street Fighter II that can be played locally with four consoles.[3]

Street Fighter 30th Anniversary Collection was developed by Digital Eclipse and published by Capcom.[4][5] To provide minimal latency in online play, the development team implemented "rewind" technology and allowed players to adjust their own input latency via an in-game menu.[2]

In Japan the compilation is known as Street Fighter 30th Anniversary Collection International. In addition to the international version of each game, it also features the Japanese versions.[7]