Capcom Database
Register
Don't have an account?
Sign In
Advertisement
in: Games, Minna to Games, Card Games,
and 7 more 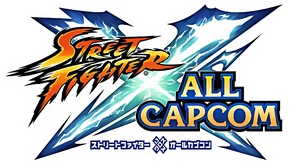 Street Fighter × All Capcom (ストリートファイター×オールカプコン, Sutorīto Faitā kurosu Ōrukapukon?) was a RPG strategy card game released November 13, 2013 for Japanese mobile phones, and later discontinued on May 13, 2015. It is a direct successor to Minna to Capcom All Stars (which was discontinuated on April 11, 2013) and it reused most of its art assets and gameplay. It is one of a number of Minna to series card games.

The game was a massive crossover between Capcom franchises, and included more than 500 characters from 24 different franchises.

Referred to as a "Capcom Hero Training RPG", the game is the successor of the discontinued Minna to Capcom All Stars, a trading card RPG game where each side plays using a deck of character cards. There are three game modes: Street Fight (ストリートファイト, Sutorīto Faito?) allows the player to go through various missions to strengthen their deck, fighting against enemies in various locations; Team Battle (チームバトル, Chīmu Batoru?) is a 20 vs. 20 mode where two player teams try to defeat a powerful boss first to gain Support P, points which are added to the player's supporting franchise; and Arena Battle (闘技バトル, Tōgi Batoru?) where players can fight in 10 vs. 10 battles to get a boost in Support P. The series which gathers the most support gets first place in the weekly Title Ranking.

Later updates to the game has seen the inclusion of more cards, an extra "SSR" rarity rank and new modes like the Arena (闘技, Tōgi?).

In Street Fight mode, the player can level up and raise a card's stats through battles against strong boss characters. Each stage's background in this mode is based off locations from all represented games, as well as the weaker enemies encountered before the proper boss fight.

In "Capcom World", a place where all Capcom characters live, the Street Fighter cast held a tournament to decide Capcom's No. 1. At the finals between Ryu and Chun-Li, however, characters from other franchises decided they wanted to participate as well, and joined the battle. In order to organize the subsequent chaos, a "Capcom No.1 Finals Steering Committee" (カプコンNo.1決定戦 運営委員会, Kapukon No. 1 Kettei-sen un'ei īnkai?) was hastily created to determine the No. 1 with the help of fans.

The four members making up the "Capcom No.1 Finals Steering Committee".

The game includes more than 500 character cards from an initial set of 23 franchises spanning Capcom's 30+ years of history, plus one extra series (Gotcha Force) added at a later date. Represented franchises, as seen in the official site, include the following: