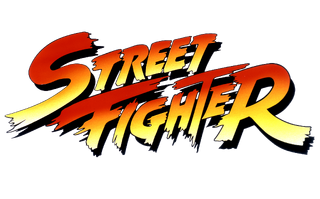 Street Fighter (ストリートファイター, Sutorīto Faitā) is a 1987 arcade game developed by Capcom. It is the first competitive fighting game produced by the company and the inaugural game in the Street Fighter series. While it did not achieve the same popularity as its sequels (particularly Street Fighter II) when it was first released, the original Street Fighter introduced some of the conventions made standard in later fighting games, such as six attack buttons (only found on some versions of the game) and special command based techniques. Character art was drawn by Bengus.

Unlike subsequent Street Fighter games, the player cannot choose his or her own character. Instead, the first player is assigned to play as Ryu, while a second player can join in and play as Ken in competitive matches. The player can perform all three of Ryu and Ken's signature special moves, but the timing is very difficult. Also unlike later games, doing 1 or 3 of these moves could easily defeat an opponent in a matter of seconds.

The single-player mode consists of a series of battles against ten opponents from five different nations. At the beginning of the game, the player can choose the country where their first match will take place, with available choices of Japan or the United States, as well as China or England, depending on the DIP switch setting. The player will then proceed to fight against the nation's two representing opponents before proceeding to the next country. In addition to the regular battles, there also two types of bonus games which player can compete for additional points, including a table breaking and brick breaking bonus games. After defeating the initial eight, the player will travel to Thailand to fight against the final two opponents.

Each match is a series rounds in which the player must defeat their opponent in less than 30 seconds. If a match ends before a fighter is knocked out, then the fighter with the greater amount of hit points left will be declared the round's winner. The player must win two rounds in order to defeat their opponent and proceed to the next battle. If the third round ends in a tie, then the computer-controlled opponent will win by default or both players will lose. During the single-player mode, the player can continue after losing and fight against the opponent they lost the match with. Likewise, a second player can interrupt a single-player match and challenge the other player to a match.

The game controls consists of an eight-directional joystick and depending on the cabinet: six attack buttons, three punch buttons and three kick buttons of differing speed and strength; or two mechatronic pads for punches and kicks that determined the strength level of the player's attacks. The player uses the joystick to move towards or away from an opponent, as well to jump, crouch and defend against an opponent's attacks. By using the attack buttons/pads in combination with the joystick, the player can perform a variety of attacks from a standing, jumping or crouching positions. There were also three special techniques, performed by inputting a specific directional-based command and button combination. These techniques were the Hadoken, the Shoryuken and the Tatsumaki Senpukyaku. Unlike the subsequent Street Fighter sequels and other later fighting games, the specific commands for these special moves were not given in the arcade game's instruction card, which instead encouraged the player to discover these techniques on their own.

Street Fighter was produced and directed by Takashi Nishiyama (who is credited as "Piston Takashi" in the game) and planned by Hiroshi Matsumoto (credited as "Finish Hiroshi"), who both previously worked on the overhead beat 'em up Avengers. The two men would leave Capcom after the production of the game and were employed by SNK, developing most of their fighting game series (including Fatal Fury and Art of Fighting). The duo would later work for Dimps and work on Street Fighter IV with Capcom. Keiji Inafune, best known for his artwork in Capcom's Mega Man franchise, got his start at the company by designing and illustrating the character portraits in Street Fighter. Nishiyama drew several inspirations for developing the original gameplay of Street Fighter from martial art styles he was practicing at the time.[1][2]

Two different arcade cabinets were sold for the game: a "Regular" version (which was sold as a tabletop cabinet in Japan and as an upright overseas) that featured the same six button configuration later used in Street Fighter II and a "Deluxe" cabinet that featured two pressure-sensitive rubber pads. The pressure-sensitive pads determine the strength and speed of the player's attacks based on how hard they were pressed.

In the worldwide versions of the game, Ryu's and Ken's voices were dubbed so that they yelled the names of their moves in English (i.e.: Psycho Fire, Dragon Punch, Hurricane Kick). Subsequent localized releases left the Japanese voices intact.

The game was commercially successful in arcades. On the Coinslot charts, printed in the August 1988 issue of Sinclair User, Street Fighter was the top dedicated arcade game.[6]

The arcade version was well received. Tony Thompson of Crash, in its October 1987 issue, said it "breathes new life" into martial arts games, with a "huge" cabinet, "big" characters, pads where "the harder you hit the pads the harder your character hits", and "secret techniques".[7] In its January 1988 issue, Julian Rignall and Daniel Gilbert said "it adds a new dimension with pneumatic punch buttons" and the action is "gratifying" with "great feedback from the buttons" but "there's very little to draw you back" after the novelty wears off.[8] Clare Edgeley of Computer and Video Games, in its December 1987 issue, said it had "huge" sprites, "among the most realistic" characters, and "intense" action, but requires mastering the controls, including punches, kicks, stoop kicks, flip kicks and backward flips. She said "the competition is intense" and the deluxe version "is much more fun."[9] Sinclair User awarded the game a maximum and claiming it was "one of the games of the year",[10] while Computer and Video Games said it had "no lasting appeal whatsoever".[11]

Additionally, Street Fighter, like many other games during this era of gaming, credited its staff in its default Score Ranking Table, which is as follows:

Game video
Add a photo to this gallery