Sting Chameleon is a boss character from the Mega Man X series of action platformer games. He is one of the eight Mavericks and a boss in the first Mega Man X game, designed to resemble a chameleon. He is a Maverick Hunter in charge of the ninth Special Forces under Sigma.

The battle will be difficult without knowing his weakness. During the battle when climbing, Sting Chameleon will disappear, so X must be sure where he'll come out. If he appears, he'll use his tongue at him. When climbing, he shoots spikes from his tail. Later, he uses his tongue on the ceiling to create a flood of spikes, making him difficult to beat. Boomerang Cutter is his weakness, but it doesn't cut off his tail, unlike cutting the tentacles of Launch Octopus or the trunk of Flame Mammoth. 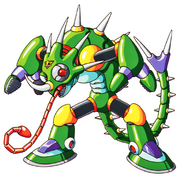 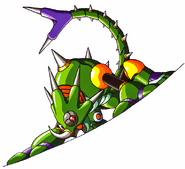 In-game model in Mega Man Maverick Hunter X
Add a photo to this gallery
Retrieved from "https://capcom.fandom.com/wiki/Sting_Chameleon?oldid=138174"
Community content is available under CC-BY-SA unless otherwise noted.