Steve appears to have light brown hair with long fringes in each side and black eyes. In his in-game appearance, his hair is light auburn and he has aqua blue eyes.

He wears a blue short sleeved openly loose prison button shirt with white outlines. It has the sign of "Rockfort Prison 267" at the back of his loose button shirt, underneath is a yellow tank top, shades of brown camouflage pants and brown combat boots. Like the other prisoners including his father, he has a choker on his neck as well as wearing black studded wristband in both of his wrists.

When he was injected by Alexia Ashford from her mutant strain within The T-Veronica Virus, Steve's clothes are ripped into shreds and his skin becomes green with reptilian scales from top to bottom with large spikes from his shoulders, back and elbows and his feet becomes reptile-like. His eyes are red, though his hair remains the same, but darker. He also wields a giant axe that Alexia previously handed to him.

In Resident Evil The Darkside Chronicles, during the cutscenes in the Game of Oblivion segment, Steve's appearance is slightly similar to Leon's in Resident Evil 4 with fringes in each side of his hairstyle. His hair is now burnt orange and his eyes are blue. His main outfit had minor changes which include the collar of his prison button shirt is extended, sporting a yellow t-shirt, and his camouflage pants being yellow and green. He also gained a hoop earring on his left ear and a barcode tattoo on his left arm.

In his mutation form, his skin is pale green with purple streaks coming from his larger arms and more spikes at the left side of his back and his heart is exposed. He still wears his camouflage pants which were shredded into short-like remains instead of being completely removed. He also gains reptile-like fangs and his eyes remained red.

When he reverted to normal, his skin became pale and the remaining reptilian-like skin were on his left face, left shoulder and the right chest, it was not seen in Resident Evil The Darkside Chronicles.

Steve was imprisoned in the Rockfort Island's facility along with his father Mr. Burnside a former Umbrella employee and The Umbrella Corporation killed his mother Mrs. Burnside. He escapes from his cell during the viral outbreak. At first, he is hesitant to trust Claire and only cooperates with her reluctantly. Later however, Steve becomes more open and attached to her after he is forced to kill his own father who has become a zombie during the outbreak.

Steve and Claire eventually end up in Umbrella's Antarctic Facility where he was captured by Alexia Ashford and used as a test subject for the T-Veronica Virus. Claire meets Steve who was chained and mutates into a monster and attacks Claire in this form. He is nearly invulnerable to damage and wields a giant ceremonial axe that normal humans couldn't do that.

While running from Steve, Claire was attacked by one of Alexia's tentacles. Steve, seeing this, regains control of his mind and cuts the tentacle apart, freeing Claire. In retaliation, Alexia strikes him with one of the tentacles, inflicting a mortal wound. His failing body finally rejects the mutation, and he changes back. He dies in Claire's arms just after professing his love to her. Albert Wesker has mention him at the end of the game where he already taken Steve's corpse while Chris is dealing against a mutated Alexia and he remarks at the siblings that he will use him once he was resurrected to see Claire much to their fury. As his remark about Steve turns out to be a jab between the Redfield siblings.

In Resident Evil The Darkside Chronicles, it was revealed that Albert Wesker uses The T-Veronica Virus from Steve's corpse and given it to a South American drug lord named Javier Hidalgo and he uses this to cure his ailing daughter Manuela Hidalgo and this was the last mention about Steve. 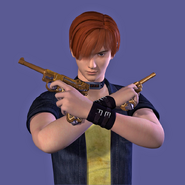 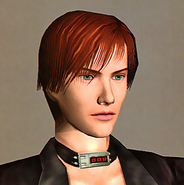 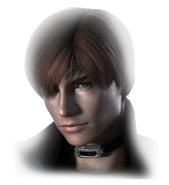 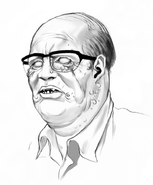