Star Man (スターマン Sutāman) is a character from the classic Mega Man series of action platformer games. He is a Robot Master created by Dr. Wily who appears as a boss in two Mega Man games. During the events of Mega Man 5, Star Man takes over an abandoned space station over Earth.

Star Man is an ardent romanticist who enjoys watching opera and musicals, but is also a sentimentalist. He has a tendency to be excessively emotional and make decisions based on feeling rather than reason, and does not get on well with pessimists. He often refers to himself by the nickname of the Splendid Noble Youth, and dreams of someday travelling through space with a love of his own. 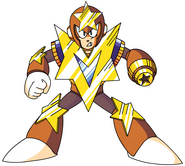 Starman from the Ruby Spears Series.

Starman in the Upon a Star OVA.

Starman in the Megaman Megamix. 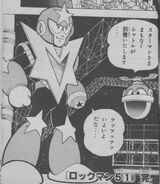 Starman as he appears in the Megaman 5 manga.
Add a photo to this gallery
Retrieved from "https://capcom.fandom.com/wiki/Star_Man?oldid=134365"
Community content is available under CC-BY-SA unless otherwise noted.