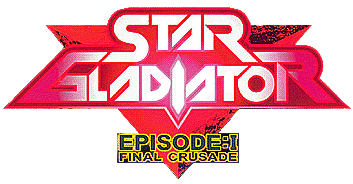 Star Gladiator - Episode 1: The Final Crusade (スターグラディエイター, Sutāguradietā?) is a weapon-based 3D fighting game developed and released by Capcom for the PlayStation-based ZN-1 arcade hardware in July 1996. The first installment in the Star Gladiator series, it was Capcom's first in-house polygonal fighting game (the earlier Battle Arena Toshinden 2 was licensed to Capcom from an outside developer).[1] A PlayStation port was released in October 1996. It was followed by a sequel, Plasma Sword, in 1998 which was only ported to the Sega Dreamcast despite much speculation of a PlayStation conversion.[citation needed]

Instead of the six-button configuration system seen in past Capcom fighting game series such as Street Fighter II and Darkstalkers, Star Gladiator utilizes a Soulcalibur series-esque four-button configuration system, which consists of two attack buttons for a character's weapon, a kick attack, and a guard defense. The fighters battle upon a hovering arena, and if a fighter is knocked off the arena, they lose the round.

Plasma Reverses are two special guard moves that can be unleashed at any time from within a battle. A Plasma Reflect enables a fighter to deflect an opponent's incoming move and stun them, leaving them vulnerable for a few seconds, while a Plasma Revenge enables a fighter to counterattack an opponent's incoming move and strike back with their own fast attack. Characters can also use a Plasma Strike, which can cause huge damage to an opponent if it connects on sight, but a Plasma Strike can only be done once per round.

Star Gladiator also introduces the Plasma Combo System. Through a specific string of attacks, a fighter can combo their opponent even if the opponent themself is blocking. If a character strings together five hits and presses a specific button at the end of the combo, they initiate a Plasma Final, which unlocks a technique that inflicts a large amount of damage upon their opponent if used. This system was later discarded in the game's sequel, Plasma Sword.

The arcade mode of Star Gladiator consists of ten fights. Depending on who the player chooses as their character, they will fight against a specific set of opponents. Gore, who serves as the sub-boss of the game is always fought at Stage 9 and Bilstein, who serves as the final boss of the game is always fought at Stage 10. Depending on how quickly the player defeats Bilstein via the arcade mode's time limit, either the game ends with a false ending or the player is then taken to a special battle against an unplayable computer-controlled true final boss named Ghost Bilstein. Losing to Ghost Bilstein results in both a bad ending and a game over while defeating Ghost Bilstein results in the chosen character's own true ending.

In the year 2348, humans have been exploring the vast reaches of outer space for the past four centuries and have established peaceful contact with various alien civilizations. People now emigrate from one planet to another and life is generally good. However, some problems arise with a couple of alien races, so the Earth Federation begins its research in creating a Plasma-power weapon to help protect the Earth from any possible outside threats.

Dr. Edward Bilstein: a Nobel Prize-winning physicist for the Earth Federation, uncovers the secret to humanity's "sixth sense": a technique for capturing the energy of the human mind and discovers how to use it as an energy source he calls "Plasma Power". The specific Plasma weapon is built, using mental power as its basis and that Bilstein is able to gain fame and fortune for the invention, but it is soon discovered by the Earth Federation that Bilstein had experimented on actual human bodies during his research on Plasma Power and that he's immediately arrested and exiled from Earth, being imprisoned in a floating prison satellite that orbits the Planet Zeta while the development of the specific Plasma weapon is indefinitely suspended.

Word of Earth's possession of a super weapon immediately spreads throughout the universe and that it instantly reduces hostile confrontations while the name Dr. Edward Bilstein is completely forgotten from within the minds of everyone. However, four years later, a report from Zeta states that an Earth Federation army base from upon the planet was attacked and immediately destroyed by a small group of rebels calling themselves the "Fourth Empire" and that Bilstein, who had built himself a powerful cyborg body and managed to escape from the floating prison satellite on Zeta, is the one who's leading this group of dangerous individuals.

With several other similar reports coming from other nearby planets and realizing that the specific pattern of attacks is leading right back to Earth, a panicked Earth Federation has only one recourse: to find people who could utilize Plasma Power in their own given accord and attempt to stop Bilstein from within a last, desperate effort before the mad genius can invade and conquer Earth and the rest of the universe with his nascent Fourth Empire. All of Earth's hopes rest in the project codenamed "Star Gladiator".

According to supplementary materials, Star Gladiator's stages are more sequential as a timeline to its story's events and are ordered in the perspective of Hayato's witnessing of events.

According to Capcom's former senior manager of community, Seth Killian, Star Gladiator was originally supposed to be a Star Wars game.[2] The game was Capcom's first in-house polygonal fighting game, as the earlier Battle Arena Toshinden 2 was licensed to Capcom from an outside developer.[1]

Being the company's first attempt at an arcade 3D fighting game, Star Gladiator was well received by many Capcom fighting fans as several cast members bore some resemblance to the characters of Star Wars.[citation needed]

A Next Generation reviewer called Star Gladiator "a quirky, stylish game that is more subtle than obvious, with innovative gameplay and likeable character design." He especially praised the ability to move, attack, and defend in three dimensions, and the "intuitive and simple" controls for executing these moves.[3] GamePro's Bruised Lee approved of the game's graphical effects, unique combo system, and characters, and deemed it a satisfying first foray into 3D for Capcom.[4]

The PlayStation conversion also received positive reviews, with critics almost universally praising the characters and the variety of their fighting techniques,[5][6][7] as well as the game's graphics, particularly the 3-D animated backgrounds.[5][6][8][7] The most common criticism was that the game is too easy in single-player mode.[5][7] Art Angel of GamePro said that Star Gladiator's "visual appeal and outstanding control will put other 3D games on their backs."[7] Next Generation was more moderate, saying that Star Gladiator "is a pretty good game all on its own", but is more of a harbinger of the more outstanding 3D fighting games he anticipated Capcom would put out in the near future.[8] GameSpot assessed that "All in all, the surreal alien characters, weapon-based fighting, and overall quality make Star Gladiator yet another peal of the thunder in the resounding Capcom storm."[6]

Star Gladiator has an aggregate score of 82.40% for the Playstation version on Gamerankings.com based on 5 reviews.[9]

Under the feet of the characters. 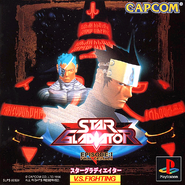 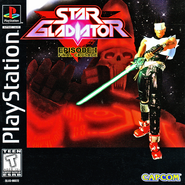 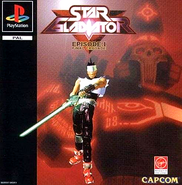 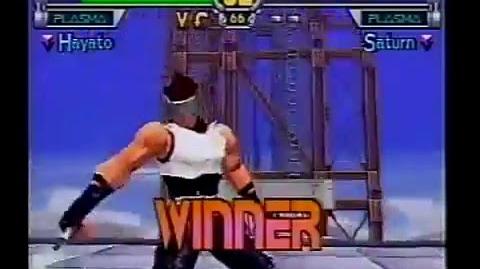