Spark Mandrill was voiced by Randy Brososky in Mega Man Maverick Hunter X and this is the second appearance where Spark Mandrill speaks (unlike the first one where he has a speaking role is in Ruby Spears' Mega Man cartoon).

In Mega Man Xtreme, Spark Mandrill will behave like the one in his first appearance. 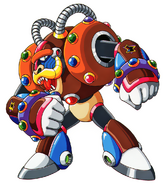 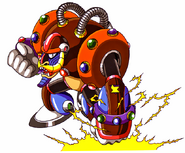 Mega Man Maverick Hunter X
Add a photo to this gallery
Retrieved from "https://capcom.fandom.com/wiki/Spark_Mandrill?oldid=131137"
Community content is available under CC-BY-SA unless otherwise noted.