Spark Man (Supakuman in Japanese) is a character from the classic Mega Man series. He first appeared as one of the Robot Master bosses in Mega Man 3.

Created by Dr. Light and Dr. Wily based on a plug, Spark Man was designed to charge electricity, but was controlled by Dr. Wily, making him a combat robot.

The lifts go up very fast in Spark Man's stage. If Mega Man is not careful, he'll crash into the spikes, causing an instant death.

Spark Man is revived by Ra Moon and is encountered as a boss in Episode III. During the battle, he throws Spark Shocks at Mega Man. When far away, Spark Man can use a fully-charged electric bolt against Mega Man. When in close proximity, he can slash Mega Man and damage him.

Spark Man behaves like the one in his appearance. The switches in his stage are slower than in his first appearance. 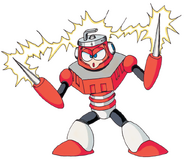 Rockman Character File
Add a photo to this gallery
Retrieved from "https://capcom.fandom.com/wiki/Spark_Man?oldid=132588"
Community content is available under CC-BY-SA unless otherwise noted.